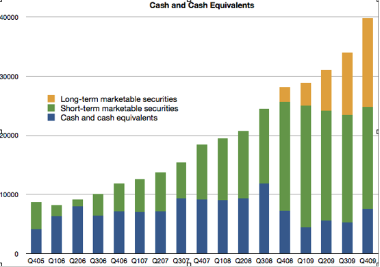 Apple still has no debt.

I consider it safe to assume that at least $10 billion will be added during 2010 for an end of year total of $50 billion.

To put that in perspective, there are only 76 companies (out of 2673 listed on Google finance) whose entire market cap is greater than $50B. Nokia is not one of them.