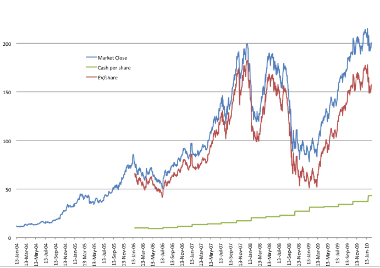 On Christmas Eve 2007 to be precise. That’s when the Enterprise Value/share was $181.5. These days it’s around $150. The Enterprise Value (EV) measures the value of future cash flows excluding current assets and is a better indicator of the potential of a company than its current overall value.

As Apple’s cash continues to grow, the gap between EV and MV will also grow. If the MV remains low (as the P/E is indicating) then the Enterprise Value, i.e. the net present value value of future cash flows, drops.

Did Apple’s prospects peak in 2007–six months after the iPhone was first launched–or is the current valuation still a function of sentiment of the overall economy, independent of the company’s fundamentals?