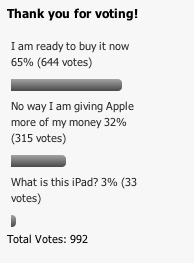 Deagol counts about 120k iPad units were pre-ordered on the first day. How do we judge this performance?

The problem will be in using some comparable as a measure of reference. This is a problem because first, there is no equivalent product in history, second, there are few similar products that are pre-ordered and sold without user samples being available, and third it’s being sold through a very limited channel (on-line Apple Store). Lastly, the number includes only delivered units vs. reservation for pick-up.
Nevertheless, the figure is intriguing. One class of comparable products might be new smartphone products from companies that were launching on new platforms.
One example is the Android G1–the first Android device. It sold 663k units in the launch quarter. Another is the Nokia 5800, Nokia’s first touch capable device. It sold 536k units in the first quarter (up to 1 million in the first 3 months). Sony Ericsson’s first Windows Mobile device was the X1. It sold 237k units in the first quarter of sales. The first Sense UI HTC device (the Diamond) sold about 1 million units. The RIM Storm, RIM’s first touch device sold 1.6 million units. Finally the iPhone which sold 1.1 million units in the first full quarter of sales (about 1.4 million if we include the weekend sales that fell outside the first quarter).
The iPad does seem to be doing rather well relative to these products. Again, their figures were for a full 90 days of sales and were sold through physical retail channels in a variety of geographic markets.
I will be surprised if the number of units sold in Apple’s CQ2 don’t exceed 1 million. (Apple will book all these sales only on delivery which means they won’t appear in CQ1 sales figures). This will probably mean better performance with a new platform than Nokia, Google, Sony Ericsson or HTC and perhaps better than the iPhone.
(data source: Canalys).