The number of Android devices is rising steadily; it’s already up to 135.  Android devotees should rightly rejoice.  However, Android is not the first mobile platform with an open licensing strategy. A quick visit to pdadb.net lets us count the number of devices that shipped for every mobile platform in history.  We can also see the current market shares as listed by Gartner for these platforms.

The numbers of SKUs (stock keeping units) that have shipped historically vs. the market shares of the mobile phones running those platforms are (see Footnote below for some caveats):

The same data in a scatter plot: 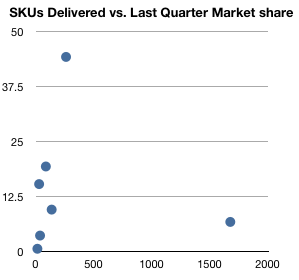 (SKUs on the x-axis and share on the y-axis)

The thing that jumps out is how uncorrelated the two quantities are.  The Windows Mobile/CE number is such an outlier that it breaks any attempt to link the two variables.

What’s likely to happen is that since the licensing of Android is even less problematic than it was for WinCE (i.e. it’s both free as in beer and free as in speech) the number of Android SKUs is likely to overtake WinCE.  In other words, we’re very likely to see Android grow from hundreds to thousands SKUs.

However, the real question for the Android platform isn’t whether it will have licensees. WinCE proved that there is vast demand from many companies to build cloned and undifferentiated devices. The real challenge is whether Android can achieve significant volumes without fragmentation to keep the platform/network effect going.

The WinCE platform was actually less fragmented through its life than Android is today. This is understandable since the source code was decidedly not open and thus not modifiable and new versions were released far less frequently. And even with a high price tag, it was wildly popular with licensees. Nevertheless, the volumes never came and Microsoft was forced to abandoned the whole strategy.  The next version of Windows Mobile (Windows Phone 7) will follow an “iPhone lite” model of highly restricted configurations and device and ecosystem specification.

So will Android follow the fate of Windows Mobile with an even more fragmented, bazaar-like licensing model? Or will thousands of undifferentiated Android devices swamp their integrated competitors?