The end of June will mark the third anniversary of the market release of the iPhone. When it arrived in June 2007, anticipation for the product was significant with high consumer awareness and expectations–though the 10 million/yr. target for 2008 was met with skepticism by many.

The iPhone launched on June 29th 2007, with only a few days remaining in the quarter. 270k units were sold in that quarter and that was considered a solid start. When the company reported earnings a few weeks later (July 18th 2007) the company’s stock price jumped to $140 a share.

As a sign of optimism in the company’s prospects, the P/E ratio showed that the company was expected to reach 35% growth (35 P/E).

Was this optimism warranted?

A huge world-wide recession started only six months after the iPhone launched and, by some accounts, it is still lingering today. That meant the company faced decreasing consumer spending and constrained markets world-wide. The recession was expected to challenge Apple’s premium positioning across all its product lines. The optimism from 2007 seemed exuberant. Where do we stand today?

This table shows the actual values of the iPhone’s 2007 launch quarter vs. the estimated values for Apple’s income statement exactly three years later. 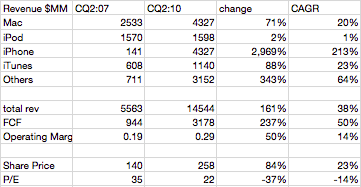 Although we don’t know what the share price will be come July, as of today the share price has grown at less than half the rate of FCF growth: 84% or 23% compounded. As a result the P/E dropped from 35 to 22.

It’s remarkable that growth expectations today are lower than they were at iPhone’s birth even though the company outperformed those expectations through an unforeseen economic crisis.