Apple just reached a new all-time closing high.  It’s remarkable that so soon after a recession the stock is enjoying new highs.  The Dow would have to gain 40% to make the same claim.

So some may ask whether Apple’s stock is getting ahead of itself.  Perhaps it’s showing signs of “irrational exuberance”.

This is not the case.  In fact, the stock is showing signs of irrational despondency.  This is demonstrated with the following graph.

[Updated] The same data is shown in the following graph where I used a 12 month rolling window (trailing twelve months) for the year-on-year growth to smooth out quarterly anomalies as per suggestion from Deagol in comments. 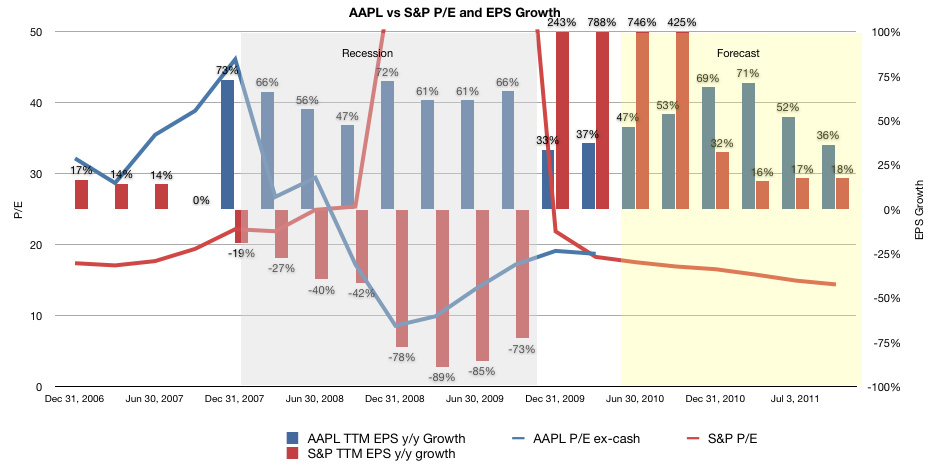 Note how S&P earnings were indeed in a state of severe decline during the recession, and how the P/E gyrated wildly as a result. (I’ve had to clip the actual values in the graph for clarity but I include all the data in the table at the bottom of this article).  Post-recession S&P P/E began to return to normal at the beginning of this year and is forecast (by S&P) to align once again with the pre-recession growth in earnings.

During the recession, Apple continues to grow but the P/E drops to remarkably low levels (10).  Although Apple’s earnings growth does diminish, it never goes away.  The anomalous growth in the third quarter of 09 is 11% due to the huge spike the year earlier with the launch of iPhone 3G.  Overall, the company continues growing at a good clip.

Not so for its P/E however.  Even after the recession ended and AAPL accelerated growth to above 50% again, the P/E remained around 20.  I left out the forecast from the AAPL line so that readers can imagine their own.

The bottom line is that at the new all-time high, Apple’s shares are trading at a discount to their growth.  Not only lower than than Apple has enjoyed historically, but lower than the average of 500 of the largest companies in the US.  Those companies having earnings growth in the teens have recovered their valuation.  Apple with growth returning to above 50% hasn’t. 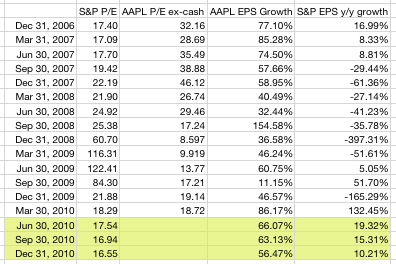