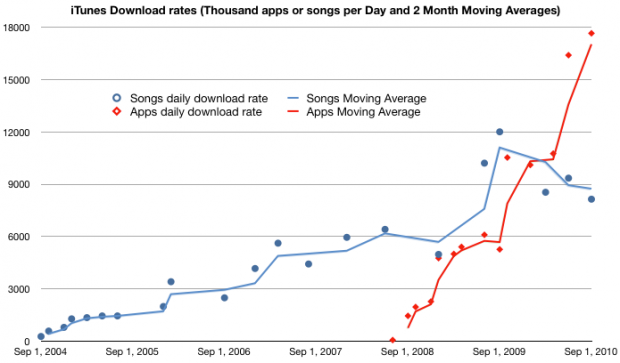 At the September 1st music event, Apple announced that 6.5 billion apps were downloaded and that there had been 120 million iOS devices sold.

This works out to 54 apps per iOS device.

On June 7 Apple reported 5 billion apps over 100 million iOS devices or an average of 50 apps for iOS device.

On April 8th, I computed that the app attach rate was 47.

Is this rate noteworthy?

Nokia had just declared that its users had downloaded over 90 million applications over the past 2 years. An analyst estimated that over 100 million users globally use Nokia smartphones/converged devices, implying an attach rate of less than 1 app/smartphone.

My, how expectations have changed.