Many comments on and off this blog raise the specter of the inevitable decline in Apple’s margins due to two forces:

The first claim can be countered by observing that Apple has not cut margins when switching from exclusive to non-exclusive distribution in several markets. In fact, Apple made this information public: When Tim Cook was asked in October 2009 earnings concall “So when you go from exclusive to multiple, you don’t change the charge to the carrier?” Cook answered, “Correct.”

The second claim can be countered by observing that innovation trumps pricing every time. When looking back at the three years’ history of the industry there is a clear but counter-intuitive demonstration of the power of innovation in the market.

Whereas one would expect that in a highly competitive market torrid growth would only be possible with lower pricing and hence margins, the opposite is observed in the phone market during the last three years: 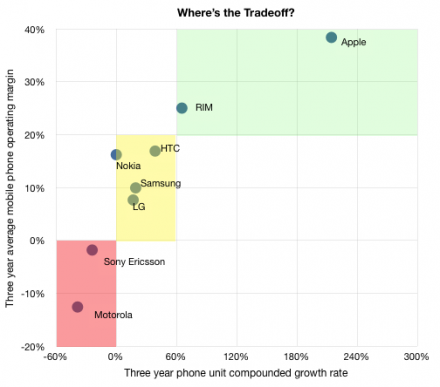 [HTC data is over a two year period]

The orthogonality of growth vs. margin points to the effect of innovation in this market. In a non-commoditized market (i.e. one where usable improvements in a product are quickly absorbed and highly valued) high growth and high margins are correlated.

In a commodity market (i.e. one where improvements in a product are neither absorbed nor valued) growth can only come at the expense of margins.

Being able to spot when a market tips from innovation-driven disruption to price-driven commodity sales is an essential skill for both investors and managers. It requires a comprehensive and integrated analysis of technology, finance, consumer behavior, competitive forces and a lot of faith in theory to make the right call.

As a keen observer I think the market still has a long way to go before it reaches this tipping point. I don’t see it happening in the next three years (which is just 2 product cycles–the most an outside observer can hope to roadmap).