The iTunes app store has gone over 310k apps approved and has 250k apps in its catalog. The Android Market, in spite of (or perhaps because of) an abundance of copyright infringements, is growing nearly as quickly. According to at least one source, there are over 130k apps.

The way to study these two catalogs is to look at the number of new applications being approved (or added) on a monthly basis.

Even better would be to index to the same starting date, as in the following chart. 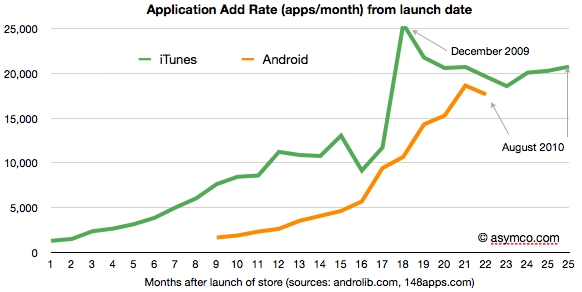 The Android Market grew grew more slowly than the iTunes store for the first two years but has accelerated to nearly the same rate now. Meanwhile, the iTunes Store has shown seasonality around the holidays (though we’ll have to see if it repeats this year) and has held fairly steady at 20k/mo.

The policies are also shifting: On one hand, Apple has also signaled that they are not willing to accept “me-too” copies of simple apps. On the other hand they clarified policies and began to allow interpreted code apps. Google has not yet reacted to infringements on its store but it’s probable that they will have to respond with some policing as download volumes grow.

The fact that the Android store is not policed or curated reduces the barrier to listing for developers and, in theory, should encourage a more rapid add rate. But the Star system of the iTunes store encourages more attempts to find hit apps. So in many ways we see that the two have an orthogonal approach:

There are few conclusions we can draw at this time about long term sustainability–after all these are ongoing and fairly young experiments.  It does seem that both platforms are attractive enough today to create critical masses of apps, perhaps exactly because they don’t put forward the same value model.