Google has created a partial list of phones that run Google services.

What’s more, there is a distinction of All Phones and Phones “with Google”. Of course that implies that we can get a list of Google Phones “without Google” (or maybe more accurately, “with partial Google”).

To clarify, according to Google there are three categories of Android Phones:

I would also add a fourth category of Google phones:

Since the list is not complete, I won’t tally it here, but it suggests a large number of Non-Google phones is possible.

[I drew the following Venn diagram to help explain the situation. The shaded areas are those which generate revenue for Google. The interesting struggle (marked with arrows) is between the non-Android Phones with some Google and the Android Phones without any Google.] 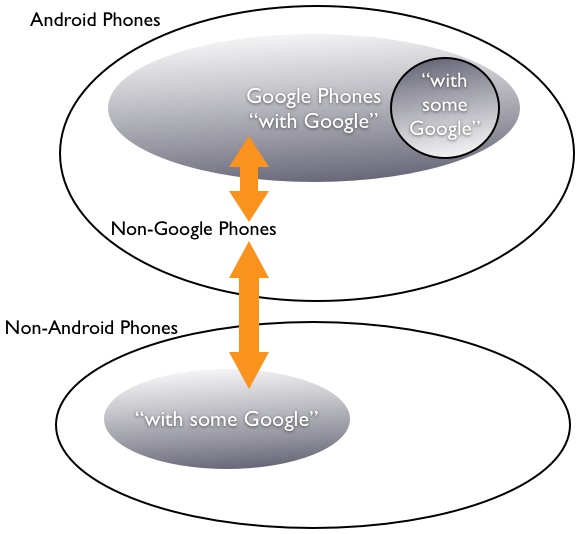 In other words, from Google’s point of view: how successful are companies other than Google at delivering Google services in spite of competition from companies with Android phones delivering services that compete with Google?

The classic example being: how effective are iPhones with Google services at competing with Verizon Droid Android phones that deliver Microsoft services? In this scenario Apple is delivering value to Google shareholders while Verizon (using Android) is taking it away.

Is this trade-off a net positive?

In other words, is Google’s income from the iPhone offsetting its losses from Android?