After the last earnings report, many noted that Apple’s gross margins dipped. Turley Muller noted in a letter to PED that the cause was probably the aggressive ramp in iPhone 4 production which broke new records at 14.1 million units.

That may be. My estimate of iPhone margin shows it dropping to about 49% from the more usual 55% (sometimes even higher).  We’ll never know exactly how much, but sometimes margins drop. RIM and Nokia are punished for drops in the GM percent so why shouldn’t Apple?

However, there are some other factors to consider: the overall margin is currently historically very high. As the high-margin iPhone makes up more of the total product mix, the overall margin should be growing. And it is. The chart below shows the trend since 2005. GM was in the high 20’s five years ago.

Note however the other margin: operating margin. After taking the fixed costs into consideration (which we saw to be shrinking as a percent of sales), Apple’s bottom line profitability has been rising slightly more rapidly than the GM. It has plateaued recently but not dipped significantly.

Also note that there have been dips in the past from which GM expansion resumed. One such dip was at the launch of the first iPhone in 2007, though we can’t be sure that was attributed to the iPhone itself or to other factors like that most cited by management: components costs.

However, the bottom line profitability is only part of the picture. It would be instructive to look at which product contribute how much. You won’t see this analysis often because the gross margin by product is not published by Apple and it takes quite a bit of guesswork to get there.

I maintain product-level gross margins and compute the overall GM bottom-up. The product-by-product line profitability is based on several assumptions which I won’t detail here, but those assumptions lead to the following contribution chart: 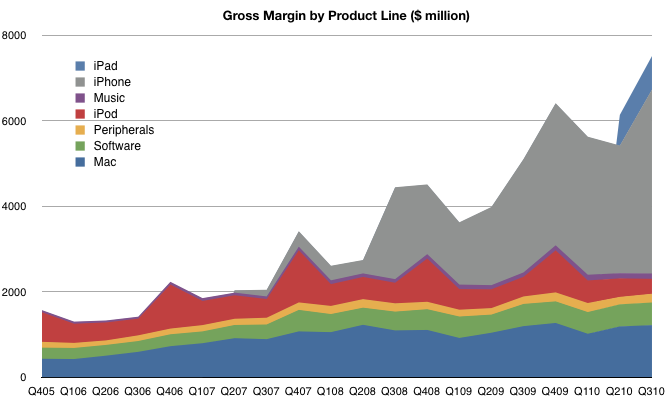 There are several takeaways here:

This picture should also be a warning to Apple’s competitors. If they seek to grow shareholder value and shift profits away from Apple they need to see just how much of that profit is captured in hardware. At the same time, they need to realize that it’s the non-hardware businesses which make the hardware so desirable. Like it’s products, Apple’s income statement is very inter-dependent.