In previous posts I detailed shares for units, sales and profits. I also offered different ways to look at the data like rankings and profit “area” maps.

This article is about the absolute numbers. What is the total market in terms of units sold, sales and operating profits.

The time frame remains from the second quarter in 2007 to the third quarter of 2010. The same eight vendors are analyzed (with “Other” available for units analysis only). 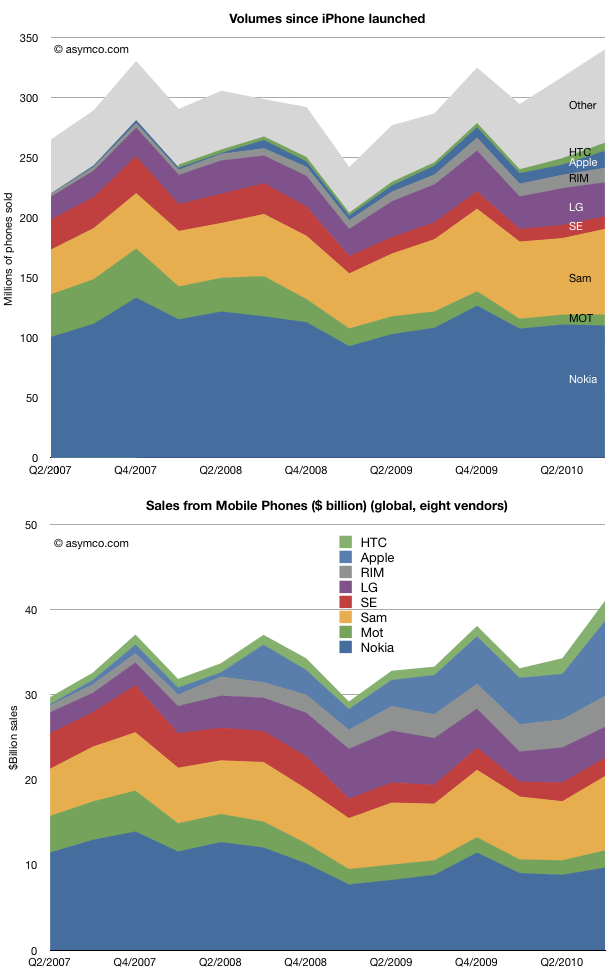 The first observation is that the market grew to new heights in Q3. 340 million phones in the quarter means that we might be looking at a very good holiday season. The market was range-bound due to the recession and its over-hang, but there seems to be a good indicator of macro-level recovery

On an individual competitor basis, the share snapshot pictures we saw earlier gave a good summary of the condition of competitors. Here we see the evolution of absolute units and sales over time. It’s instructive to scan the two charts as a pair to see how units and sales are affecting the positions of the participants.

I clustered the “pure smartphone” vendors at the top of the charts so you can visually separate them from the broader portfolios of the others.

Finally, here is the evolution of total profitability (operating) for the participants. I annotated Nokia and Apple for calibration. 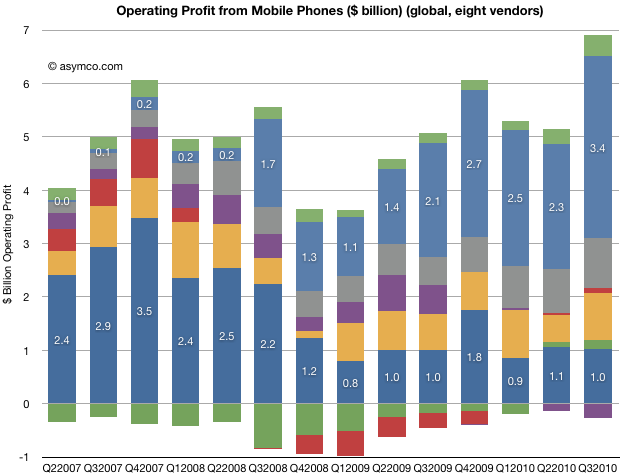 (note the color coding legend in the pervious charts).

What is most impressive is how LG, Motorola and Sony Ericsson seem to be in the same boat. At the same time, Apple, RIM and HTC are outstanding in performance. And Nokia and Samsung are stuck in a dilemma. On the other hand, every vendor is different in many ways, and it’s inaccurate to paint them with the same brush.

Overall, we see a pattern of increased absolute value in the market. All but one vendor is profitable, and sales are increasing. A large part of the growth is due to the transition of the market to smartphones.