If we look at the growth of smartphones independently from all phones, the category looks impressive:

Smartphones are now almost 24% of all phones, up from 10% three years ago.

What’s also impressive is all participants in the market grew their volumes. The rising tide did lift all the boats.

But what I really want direct attention to here is a subset of the market: modular platforms.

If you recall from the modular vs. inter-dependent dichotomy discussion, modular architectures are a way to implement products by licensing core components rather than keeping an integrated development model. I stated that modularity tends to be the better approach when markets are mature/over-serving and inter-dependency is the better approach when markets are young and the products not-good-enough.

Looking at the chart above you should note that the market is growing extremely quickly so it’s not “mature” in that sense, implying a healthy future for inter-dependent players.

So how are modular vendors faring at this stage of the market and what are the prospects of module suppliers (i.e.  mobile operating systems). 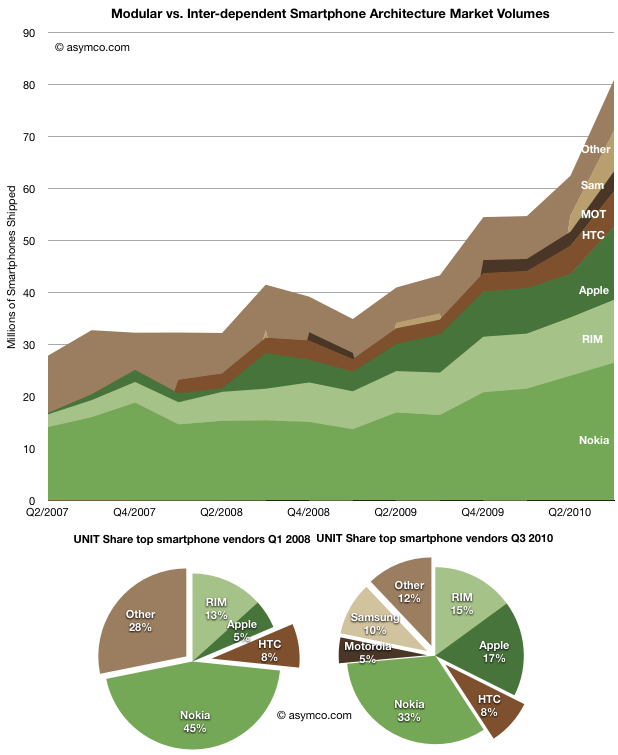 When looking at the market this way we can make some important observations:

So what’s the bottom line?

For an Android dominant future, several conditions must be met; one will need to believe all of these to be true:

Talk of Android (or iOS) “domination” is still wishful thinking. With the acceptance of Windows Phone within the value chain (device vendors, operators, developers), the brown area above will be served by two very powerful and motivated competitors. Politics and lawsuits will add drag on growth. Established brands are important to consumers and new brands (like ZTE and Huawei) will have a hard time joining the top tiers with or without Android. Established integrated vendors like Nokia, RIM and Apple don’t have modular DNA but do have massive distribution.

In the end, the real limitation is that the brown area itself is not going to get disproportionately large. Android is limited by its addressable market and that market is a lot smaller than the whole market.

Looking at the world through modular/inter-dependent lenses lets you see that mobile platform dynamics will not evolve as they did in the PC era. At least not for the foreseeable future.