The latest mobile phone estimates from Gartner made a startling claim that “Others” vendors increased share from 16% a year ago to 33%. Doubling share in a year is possible if you’re at 1% share but to double from a base of 16% is sounding improbable. They allege that the “Others” now sell more phones than Nokia. And Others don’t even include ZTE and Huawei, the prototypical low end challengers.

They emphasize this point in their discussion and state that the incumbent vendors are being pressured by these low end entrants. They go on to explain that the same set of vendors will probably use Android to enter the smartphone space.

To illustrate, the growth of individual companies is shown here (all phones). 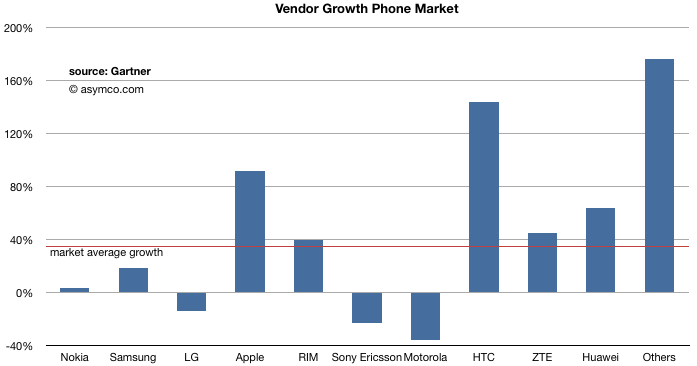 Also puzzling is that ZTE and Huawei did not share in this boom. They barely beat market growth and were growing at half of “Others”. Until recently ZTE and Huawei were themselves Others, so the new vendors are truly unbranded “white box” vendors.

To put it in perspective, their year-on-year growth is astronomical: 176%, selling 87 million more phones this third quarter than last year’s. This is equivalent to saying that a new company was born in the last year and has already become the second largest in the world. The growth in volumes is higher than the total units Samsung sold!

Extraordinary claims require extraordinary evidence. Can we check what other analysts estimated and do some form of validation of the claims?

IDC reports the same data and they only reported 340.5 million phones sold (vs. Gartner’s 417 million). Excluding ZTE and Huawei the total share for “Others” in IDC would be about 20%.

IDC and Gartner both agree on smartphones, so the difference is even more glaring when you consider the “non-smart” comparisons:

For added emphasis, I added a comparison of last year’s quarter. Last year the Gartner total estimate was about 10% higher than IDC. This year they are 30% higher.

How could the difference in the total phones sold be so big: 77 million phones?

If Gartner is right, how could IDC miss 77 million phones. If IDC is right how did Gartner conjure up 77 million phones in one quarter? That number is nearly as big as all the smartphones sold (81 million). This is not within any margin of error for whatever sampling method they use.

Perhaps they need to clarify this because until they do, neither is credible.

Note: My own models are built from individual company public reports. The only data I depend on from IDC and/or Gartner is this total market size which allows me to back out what the “Others” are doing. If the total market estimates disagree so much, I’ll be forced to throw out the “Others” all together.