Since I spend most of my time thinking about what will happen, at the end of each year, rather than looking forward I like to look back to see how wrong I’ve been. The great thing about being wrong is that you learn something. Especially if you use a foundational theory to tie concepts together. Theory building is all about finding anomalies that adjust and improve it.

Fortunately, exactly one year ago, on December 30 2009 I wrote an article asking if Android was disruptive. It turned out to be the right question to ask for 2010.

What have I learned since? END_OF_DOCUMENT_TOKEN_TO_BE_REPLACED

With a market share of 31.5 percent, Nokia is still the largest vendor of handsets in the Indian market, followed by Chinese brand G’Five with about 10 percent share, IDC said on Wednesday.

No, I haven’t heard of G’Five either. The article goes on to say that there are 68 new vendors in the market accounting for 41% of total shipments. There were only five new vendors with a share of 1% in the first quarter of 2008.

It was not long ago that Nokia held over 70% of the Indian market. That market is now larger but the share for Nokia has dropped by half at least. The share was not lost to Samsung but to 63 new entrants. They managed to capture 40% of the market, roughly equal to what Nokia lost.

These new vendors will launch Android phones next year or the year after that. According to IDC, Android obtained 9.4% in the third quarter up from 2.9% y/y. The number of Android models went from 2 to 19 in the same time frame.

What does this mean for Your favorite mobile OS? END_OF_DOCUMENT_TOKEN_TO_BE_REPLACED

Although the Apple Newton pioneered the market in 1992 and John Sculley came up with the acronym, the Newton did not sell in significant volumes. It wasn’t until 1997 with the Palm Pilot that the PDA market took off. Microsoft quickly followed with a licensed OS based on Windows CE. In 2001 Microsoft launched the Pocket PC brand to cement its attack on the PDA market. The first phones using a Microsoft OS were using something called Pocket PC Phone Edition. The first Nokia smartphones (Communicators) were built like mobile PDAs.

The logic was quite compelling. The original PDA was built to mobilize contacts, calendars and notes. They replaced bulky paper organizers and seamlessly synced to PC productivity software like Outlook. It was a compelling product in the US where small business customers needed to keep track of hundreds of contacts. Users could even ‘beam’ contacts to each other via infrared. The idea of adding a phone function to the device made sense insofar as contacts could be immediately dialed from the contact app rather than typed into another device’s phone keypad.

By the early 2000’s PDAs were forecast to sell by the hundreds of millions. END_OF_DOCUMENT_TOKEN_TO_BE_REPLACED

That amounts to nearly 1000 new apps per day.

It also seems that 500k apps will have arrived by mid-2011. As the production of apps continues to grow one wonders if this new medium will turn out to become more popular than recorded music in terms of creative output.

In a recent article I made the claim:

My bet is that by the end of 2012, it will be hard to find any branded phones which won’t run a smartphone

I also showed how pricing has evolved over the last three years. 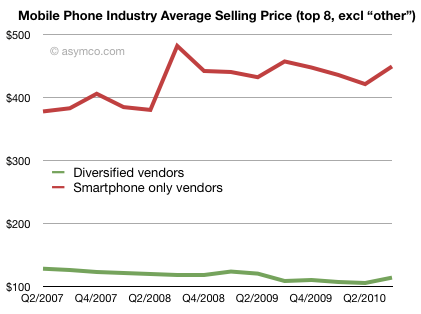 The revenue growth rate is expected to continue at 66% (following 61% and 67% for previous two quarters). Earnings growth is also expected to be maintained at 70% as it has been over the full calendar year.

Apple continues to be one of the cheapest stocks in the S&P 500 when measured by growth multiples.

After years spent thinking about it, I can only conclude that the company’s depressed valuation is due to the uncertainty surrounding the CEO succession plans.

Windows Phone 7 launched on 10 devices over 60 carriers in over 30 countries with 1.5 million of channel inventory in 6 weeks. Given the breadth of distribution, that number is not huge, amounting to less than 10k phones per operator.

Curiously, Windows Mobile was still selling in significant volumes last quarter. Maybe even higher than WP7 is selling now. In Q3 2009 Canalys reported 3.6 million WinMo units sold. In Q3 2010  Gartner estimated 2.3 million were sold through to end users. Even nine months ago Windows Mobile was running at 3.7 million units or over 1.8 million every six weeks.

Microsoft also announced they have 18,000 developers with 4,000 apps on the WP7 marketplace. That’s one developer for every 83 devices in inventory.

We’re comfortable with where we are, and we are here for the long run; Windows Phone 7 is just the beginning.

END_OF_DOCUMENT_TOKEN_TO_BE_REPLACED 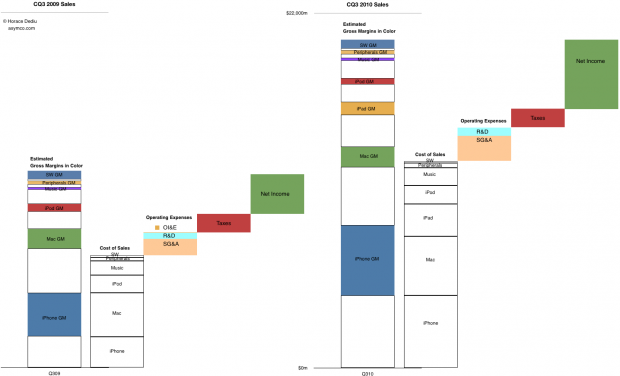 When Apple promoted HTML5 as an alternative to Flash, the value was said to be in being an open standard, and in having better efficiency for device-based execution.

The problem is that there are no authoring tools for HTML5. Flash is popular because it’s fairly easy to kick start the creative process. You buy the tools from Adobe for a few hundred dollars and begin to tinker. With HTML5 you need to be a programmer, read arcane documentation, search for sample code and manually integrate results into publishing systems. That’s bush league.

The bigger question that I struggled with is whether web apps are competitive enough. END_OF_DOCUMENT_TOKEN_TO_BE_REPLACED

I am preparing a productization of the data underlying the models I use. I am working with Timetric.com to build the product and we are considering several options for packaging and pricing/access.

The first question I have is about how readers would like to see the data. I put up a poll to the right.