For comparison, here are a select few vendors’ smartphone reported shipments. RIM is the first to report and we’ll be hearing the the rest by the end of January. 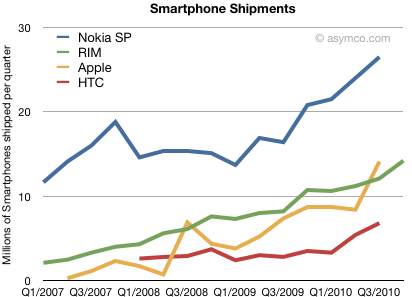 The bulls will argue that the gross margin is healthy and slightly higher than anticipated.

My observation is that the company is finding growth outside its traditional markets. Given the figures above, the US went from $1.65b in revenue to $1.87b; a mere 13% growth while the company experienced 89% overall growth in revenues.

The following chart illustrates the situation: 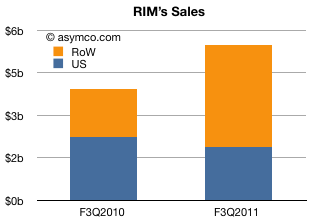 This can be seen as positive news since RIM has been weak internationally for many years and they really need to penetrate world markets. However, a -15% growth in the US is implies significant share loss in a rapidly growing and traditional stronghold.