The iPhone and iPad generated $15 billion of revenue last quarter. In addition, iPod touch generated about $2.3 billion, implying that iOS based devices were responsible for sales of $17.3 billion.

To put that in perspective I drew this chart which shows not only the sales by products but a rough representation of share of the two OS variants Apple uses to power its products. 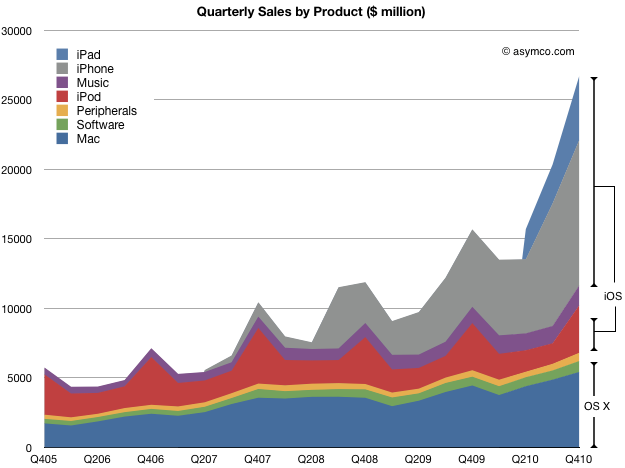 But software is even more important for Apple.

The sale of OSX software (both the operating system and applications for it) accounted for another $786 million or 3% of total. In addition, I’ve put forward some evidence to suggest that the proportion of sales due to Apps in the Music store is nearly half, or another $600 million (a bit more than 2%).

Therefore only 10% of Apple’s sales were for products not directly powered by its vengeful operating system. That speaks volumes not only for the importance of software to Apple but for the cohesion of an extensible, flexible architecture that allows it to inhabit a portfolio spanning from a music player and an enterprise server.

I recently answered a question on Quora on whether Apple is a Software, Hardware or Media company by saying it’s all three.

With 90% of sales dependent on a unique, proprietary operating system[1], perhaps the answer should have been different.