The smartphone market has grown threefold in the span of three years. However, as noted previously, the share of units running a licensed OS has not grown dramatically. The following chart shows the vendors’ shares with the same brown/green dichotomy between licensed and unlicensed OS’s. 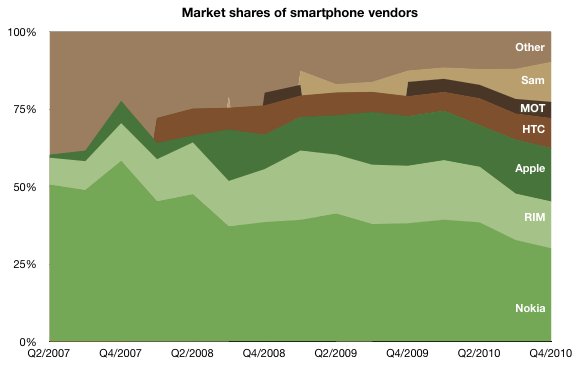 In order to gain some insight into this licensed OS area (and who the “others” are) we need some visibility into which OSs are being licensed and what their shares are.

The following chart shows the share of the various licensed platforms[1]. (I blanked out the Integrated vendors.) 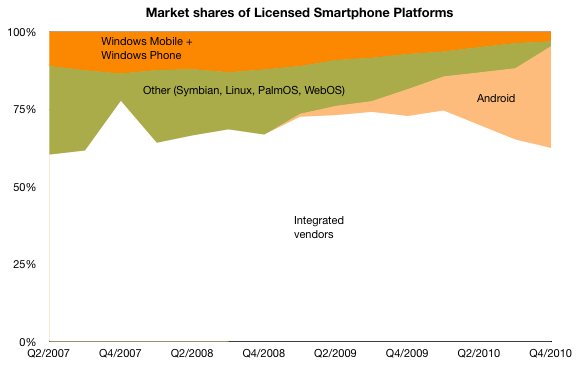 The chart shows Windows Mobile and “Other” splitting the market. Windows Mobile is rather easy to understand. It was still growing as a platform and Ballmer was famously quoted in 2007 as saying he liked their strategy “a lot”.

But “Other” is something of a mystery. What “Other” actually mostly meant was Symbian[2]. But not only the Symbian that Nokia was shipping and licensing to some vendors. At the time, Symbian also had a version called MOAP “Mobile Oriented Applications Platform” which was in use in Japan (somewhat analogous to the variants of Android now in use in China).

Fujitsu, Mitsubishi, Sony Ericsson and Sharp developed phones for NTT DoCoMo, using an interface developed specifically for DoCoMo’s FOMA “Freedom of Mobile Access” network brand. This UI platform was based on the UI from earlier Fujitsu FOMA models[3]. The user could not install new C++ applications and therefore these were not platform devices, however the industry still included these units as “smartphones” .

So what we’ve witnessed in the last two to three years is the replacement of MOAP and Windows Mobile share with Android TAPAS and OMS.[4]

But, more significantly, when looking at the rise of Samsung and Motorola and HTC we were also witnessing the demise of Palm, Fujitsu, Mitsubishi and Sharp (plus a myriad of Windows Mobile licensees even larger than the Android army).

The significance here is that “other” in smartphones is still mostly about branded vendors. This is in stark contrast to the low-end of the phone market where “others” are quickly replacing branded vendors.

So we can conclude that the smartphone market is so far showing a distinct preference for branded vendors. The value of the brand is still evident. But ZTE and Huawei are quickly developing Android competencies. How long will it be before the branded vendors feel the pressure from the upstarts?