When Stephen Elop said that Nokia and Microsoft sought to create a “three horse race” he implied that there were only two viable mobile ecosystems today. With that statement he sought to deprecate or declare “end of life” two platforms: Symbian and MeeGo, implying that Nokia’s efforts at being the third way failed.

However, he also implicitly declared irrelevant a larger set of market participants. In fact, the market is awash with platforms. Far more than the three or five that Stephen considered.

To illustrate I built the following chart showing the history of all major mobile platforms. The are ranked by launch date (earliest at the bottom). A vertical line marks the present. End dates are approximate and based on declarations of end of life rather than end of usage. 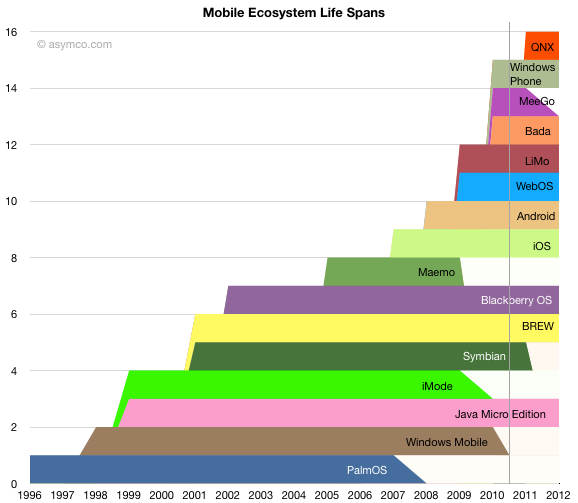 There have been 16 total mobile platforms[1], 10 of which are still (or soon will be) on the market. Of the six that were terminated, three had replacements built by the same orchestrating company (Windows Mobile begat Windows Phone; Maemo begat MeeGo, and PalmOS eventually led to WebOS.) Only three reached end of life with no known descendant (iMode, MeeGo[2] and Symbian).

Operating systems that were launched in the 1990s or early 2000s have mostly been withdrawn/replaced with the exception of Java and BREW.  “Modern” operating systems all emerged after 2007 (following iOS). A total of eight such new OSs were introduced in four years[3].

What I find noteworthy is that there is an implied peculiar fatalism about the market when only two platforms are considered viable, neither of which are more than 3 years old. While visiting the Mobile World Congress, I sensed this jumping to conclusions about platforms was eerily similar to that of a few years ago when new entrants like Apple and Google were declared dead on arrival.

I can only conclude that there is a great deal of groupthink going on in the industry. A perfect setting for a disruptive entrant to change everything, all over again.