In the quarterly smartphone summary published here, I noted the significant acceleration of Android sales at the expense of “other” and Windows Mobile/Phone. Some share was also lost to Symbian. This might be seen as justification for the “platform jump” that Nokia undertook.

In a second discussion, I published the history and life cycles of the smartphone platforms, identifying 10 platforms (out of 16) still in the market. This challenged the view that it was a two horse race today and that it will become no more than a three horse race in the future.

Questions came up about the “quality” of these platforms. Clearly some are barely viable while some are thriving. To explain the value of a platform, one metric we can use is the cumulative sales which allows us to derive the installed base.

The following charts do just that. 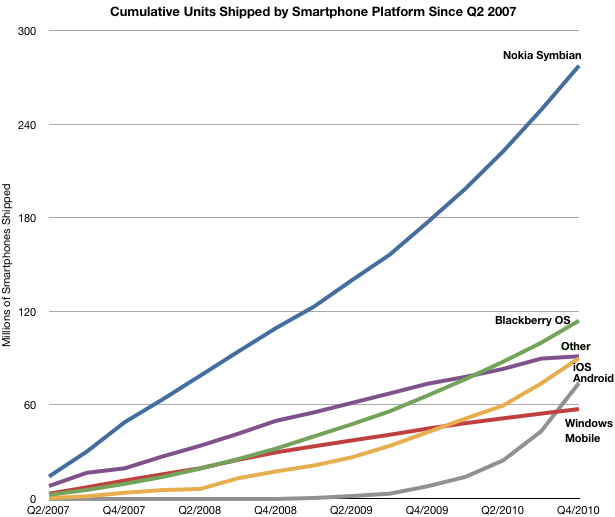 This first chart shows the cumulative total of units sold since Q2 2007. This is the sum of all smartphones sold in the last 3.5 years. There are some interesting patterns here, but right now we want to focus on the installed base.

3.5 years of cumulative sales is an upper bound on the installed base. We can get a better estimate the phones in use by subtracting from the base phones older than 2.5 years. This is shown in the second chart below: 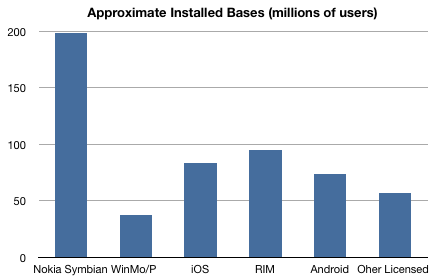 As of the last quarter, Nokia’s Symbian is likely to have 200 million in use. Apple may have about 85 million iPhones in use (this excludes iPod touch and iPads) and Android about 75 million. RIM is around 95 million and Windows Mobile less than 40 million.

What’s interesting is that of these installed bases, the largest is the one that’s just been abandoned, and the smallest was chosen as its replacement. Even that’s not quite fair since Windows Mobile is not a valid replacement. It’s Windows Phone that was chosen and that probably has an installed base of about 1 million [Unlike the measurement of units shipped, Microsoft reported two million licenses were sold to OEMs who had to build those into phones which would be shipped to carriers and distributors. One million may be a generous estimate.]

The bottom line is that there are about 5 Windows Phone users for every 1000 Symbian users. In other words, Nokia jumped from the “burning” 200 million user Symbian platform to the “ice cold” 1 million user Windows Phone platform.

The disposal of such a large installed base must count among the largest divestitures in technology history and, when coupled with the adoption of the least-tested alternative as a replacement, elevates platform risk-taking to a new level. It may seem bold, but there is a fine line between courage and recklessness.

I’ll do my own “dive” into the possible justification for this in a future posting.