The Passion of Steve Jobs – NYTimes.com

It was almost exactly three years ago that Steve Jobs dismissed the Kindle reader as a futile attempt to change user behavior.

So do we have another example of Steve’s classic misdirection where he dismisses a category only to enter and dominate it at some later time?

Let’s look at the data. The chart below shows the sales ramp of three media types served by Apple: songs, apps and books. 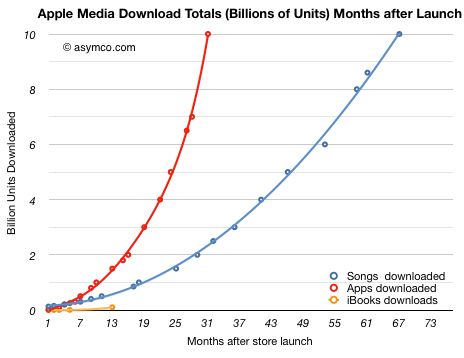 At the same point in time (11 months post-launch) there were five times as many songs downloaded and 15 times as many apps downloaded as ebooks. You can see the relationship between different media consumption more clearly on a log chart: 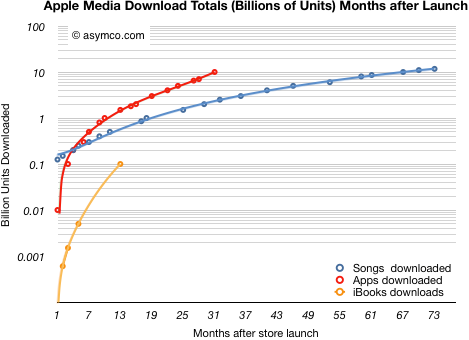 The conclusion that can be drawn so far is that apps/songs show an order of magnitude more popularity than ebooks. Perhaps Kindle ebooks outsell Amazon music downloads, but we don’t have comparable data from Amazon and it would be a challenge to compare the two Amazon media as they are packaged and dlievered in different ways (Amazon’s digital music is not an integrated offering while their ebooks are.)

Books are a 400 year old medium. Songs only 100 years old and apps a mere 10. For three centuries, the book medium had a monopoly on solitary entertainment. The download data shows how quickly new media displace the old. Therefore, in this context, it’s perhaps fair to say that Steve was right three years ago when he said “People don’t read anymore.”

Today he could add that people use apps instead. Many of the apps available are hired to do the same job for users: solitary, immersive entertainment.