As iPad shipment volumes increase and as the iPod touch becomes the de-facto iPod, it’s time to look at the overall split between iOS devices.

I will focus the discussion between iPhone and iOS “others” because I believe the two categories differ greatly in terms of their positioning and market strategy due to the different channels.

The company does not provide iPod touch units shipment data but it can be estimated that, based on overall iOS numbers released in September, iPod touch represents approximately 50% of iPod units sold.

If we put all we know together about volumes, we have the following chart: 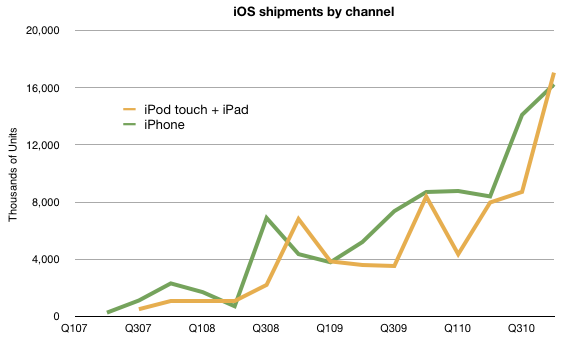 Note that iPod touch has, occasionally outsold the iPhone. The pattern of approximately equal volumes for the two types of products is likely to continue depending greatly on the growth rates.

Next, I turn the spotlight on revenues. 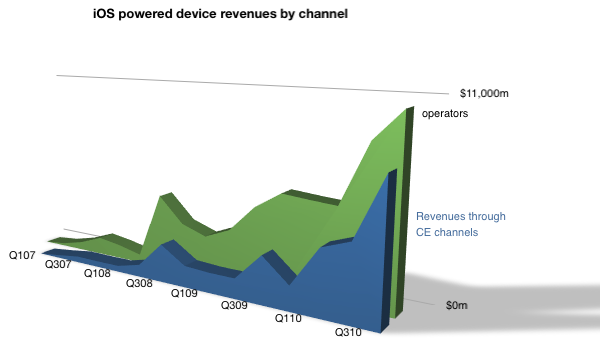 Over $10 billion flowed in from Operators, and a bit under $8 billion from other channels.

Note that I labeled the iPod touch and iPad as non-operator channel (Consumer electronics) distribution. Although this is not entirely true (and conversely iPhones are often sold through Apple stores) this gives a rough indication of split.

The iPhone business is staying ahead of the other iOS businesses but the gap is narrowing.

As previously noted, the iPhone is a unique product in Apple’s portfolio. It depends on a distribution channel that no other product was designed around. This has advantages and disadvantages. The advantage is a high margin due to service revenue sharing but the disadvantage of network incompatibilities, politics and a range of telecom-related regulations.

What I believe is that the non-operator channel will grow as a proportion of iOS revenues. This is both as iPad grows to disrupt personal computing and as the iPad emerges as a communications tool.

As time passes, I believe Apple is motivated to also move revenues to its traditional channels. Whether, or to what extent, cellular phones will move in that direction remains to be estimated.