I last looked at the race to a billion in September 2010. I’ve now added a few more data points to the tracked platforms and also added points for the major console game platforms and Symbian.

The overall chart shows how quickly a platform has grown and is bounded by a billion users and a decade of usage. 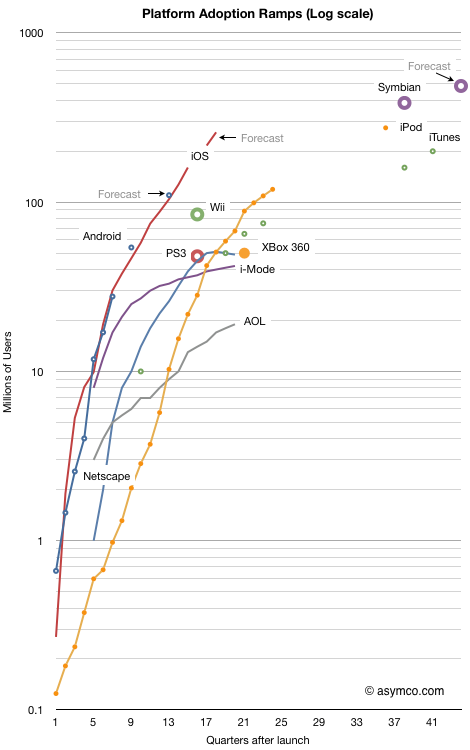 When judging the performance of a platform, the adoption slope and sustainability over time is perhaps the most interesting measure.

One can see how many platforms slow down before reaching 100 million and so far none have hit the billion mark (Windows has but not in the 10 year time frame of this chart.) Looking at game consoles also shows the limits of a narrowly focused platform. They performed better than i-Mode and Netscape but not as well as iTunes or iPod which themselves have growth limits.

If you’re looking for the “fastest growing” title, it’s a toss-up. Both iOS and Android are following almost identical trajectories.[see Notes]

The absolute highest cumulative sales total is Symbian, though now that it’s been deprecated, it’s set to be bypassed.