Michael DeGusta created beautiful and informative charts on how The Newspaper Business Implodes. 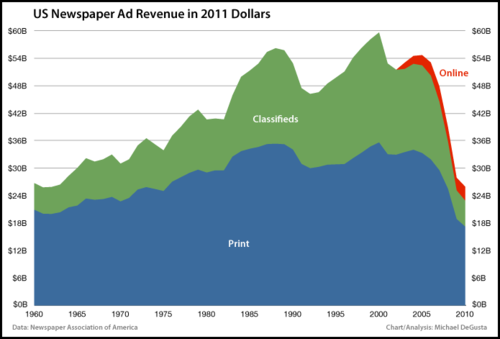 With charts, he also told the story of how the recorded music industry followed a similar path: As in the music business, digital revenue is failing to make up for the loss of traditional revenue. Ominously, online revenue is largely flat, basically unchanged from 5 years ago and still below its 2007 peak.

What I find fascinating is how both industries reacted to the crisis of old media. They embraced the new “digital” distribution model, earnestly tried to transplant their business models and found no succor.

Many observers may say that both print and music businesses were “foolish” and that they ignored the new medium of web. That somehow management dithered and missed the new wave blaming failure on incompetence. Putting aside the fact that all industry participants seem to have conspired to be foolish at the same time, this is not supported by the data. As the charts show, both industries built digital businesses. Newspapers have some of the most desirable web properties and digital music is a growing business with clever new distribution deals. They became quite smart in their respective adaptations of web distribution.

They may have started slowly but there are many cases where incumbents reacted slowly to technological change, and won.

But it’s not working.

The reason is that what we have here is a disruption. Unlike a sustaining technological shift, the new medium of the web did not permit the same business models to continue. Money was being made, just not in the same way and thus could not support the cost structures of the incumbents. Consumption of news and music is increasing but the way that it is valued is changing.

Furthermore, it’s become modularized. All the objects contained in a newspaper could, with the web, be offered independently of one-another (opinion, news, classifieds, lifestyle can each be built by specialists.)

Now I’m going to take a leap and suggest that a re-birth of the container of the newspaper in the tablet medium will require a re-integration once again. As I’ve pointed out before in The integrated iPad news daily: Read all about it! the answer is not in integration or disintegration per se. It’s in approaching the question of value chain evolution with an eye toward what is good enough and what isn’t. Integrate when the product is emerging and unsatisfying, modularize when the product is mature and over-serving.

We’re observing the same phenomenon with television. Netflix, a distributor, is vertically integrating by entering production with an exclusive top talent series.

Developers are not the only innovators that see disruption happening. Just like in “The Daily”, in music and television, talent follows where business models lead.