The US smartphone penetration continues to accelerate.

ComScore has been reporting the estimated absolute number of  smartphone users and the last month saw a significant increase of 1.58% in penetration. About 30% of the 234 million US cellphone users (above age of 13) use smartphones. That number was 21% in May of last year. 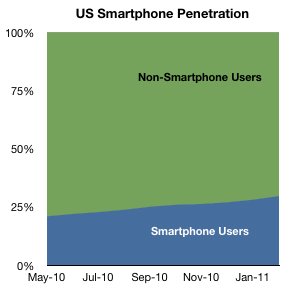 That means that over 20 million people stopped using voice-only or feature phones in the last 10 months. Equivalent to a rate of 2 million per month.

However, the rate of switching has not been steady. The following chart shows the number of switchers per week. In February it’s been about 900,000 per week and it’s quite possible that in March we’ve seen 1 million per week. 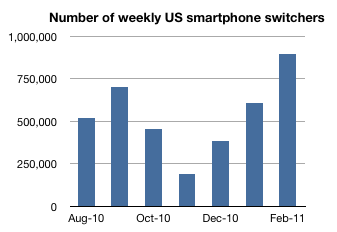 To bring the point home, I have put together a countdown timer which will be updated monthly with my estimate of the date when 50% of US cell phone subscribers will be using smartphones. (There is a link to the timer at the top right of every page on this blog).

I pinned that 50% figure because by then I hope people will stop calling them smartphones and begin calling them phones.