If you roll back to 2007 and the start of the modern era of smartphones, you can see how the two companies stocks traded places:

The recession was hard on everybody but HTC soared during 2010 while Nokia never recovered. Markets reward unforeseen growth and typically that means above-market growth.

That’s reflected in the following chart (admittedly units and not profits, but pricing and margins for both have remained relatively steady.) 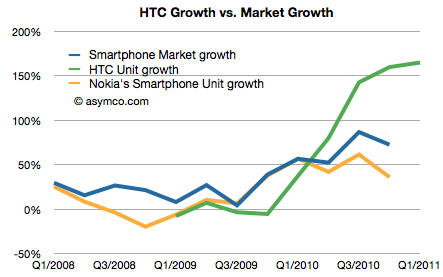 But there are a few more observations to make:

A year ago HTC was making excuses and apologizing. Today they are more valuable than the largest phone vendors. All thanks to Android.

But why no thanks to Microsoft?

HTC was the primary Windows Mobile vendor a few years ago. They claimed at one point to have shipped over 80% of all Windows Mobile devices. They were also the leader in the Pocket PC franchise as they were the ODM behind the iPaq brand from HP/Compaq. HTC would not exist today were it not for Microsoft.

The relationship is such that HTC is paying Microsoft for protection from (potential) Android IP infringements. HTC has also licensed Windows Phone though the relationship between Nokia and Microsoft must give them pause.

But that’s the whole problem. Those who live by the sword shall die by it. HTC was a Microsoft dependent and now they’re a Google dependent. As the basis of innovation shifted, HTC was agile enough to make the transition. Perhaps they can execute a portfolio switch yet again as their upstream suppliers change whims or business models.

But then again, as we saw with Windows Phone, perhaps not.