There is precious little data on Android units sold. There are estimates but no actual summary. Google themselves don’t seem to know as they don’t report sales, preferring to report “activations.”

Assuming that activations means “unique activations of new devices” then we can draw some equivalency between Google’s reports and the reported units of iOS sold. There is some uncertainty with respect to iPod touch units, but that is not very big (estimates are drawn from Apple’s reporting of overall iOS units at several points in time.)

To estimate Android, I took the download rates currently available and placed them in the month when they were published. I then interpolated the data monthly and quarterly.

To make the comparison more valuable, I chose to index the starting point at the launch of each respective platform and plot quarterly units (or activations). This way we can observe how the platforms ramped in growth and where they were at similar points in their lifetimes. 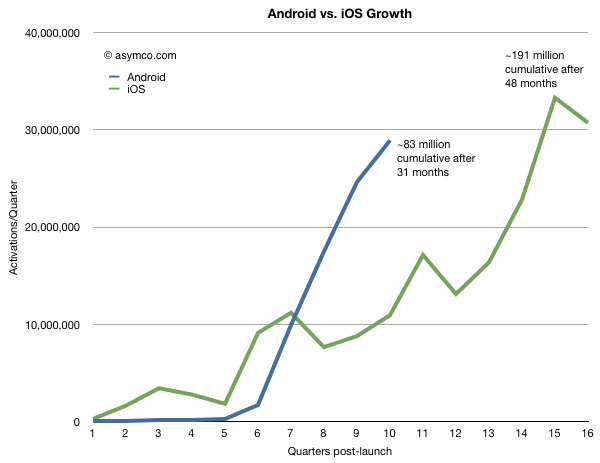 There is likely to be more seasonality in Android data than is shown, but the impressive thing is that Android is running at three times the equivalent adoption rate for iOS at similar points in time. In fact Android is being “sold” as rapidly as iOS today even though iOS has been in the market about 15 months longer.

Overall, cumulative units sold for iOS are still about twice as many but if Android will continue to grow as rapidly as it does now, it will likely overtake iOS in installed base in less than a year.

One should be careful about drawing conclusions that this implies effective competition. Both platforms are growing very quickly. iOS is growing at at least 100%/yr and Android’s second year was 65x bigger than its first. iOS growth is limited by the ramp rates of a limited portfolio of products. Android growth is limited by how quickly vendors can bring out products. Neither platform is demand constrained and hence they are competing for share of growth not for share of a fixed pie.

Extrapolation is a dangerous game, but the chart above shows some predictability in Apple’s curve whereas Android has a “step function” or discontinuous feel to it and that’s a curious thing.

Not so much for its lack of predictability but because it’s so asymmetric to iOS.

It should be noted that both business models represented above can also co-exist, at least for the foreseeable future.