Speaking of boats, there were recent claims that the iPhone is “dead in the water“. As someone who has done some sailing I can say that being dead in the water is dangerous. Not only are you not going anywhere but you also don’t have steering control. It’s movement through the water that allows a rudder to work so being stationary means that you can’t orient the boat when waves or wind might threaten stability.

This implied inability to gain directional control is what makes the accusation so powerful. How valid is it? That claim certainly was not made because the iPhone did not grow. iPhone grew at 113% year on year. It even grew sequentially in a post-holiday quarter and the growth is not slowing materially.

The claim was made that iPhone was not gaining share. But share of what? If we look at the iPhone share of all phones and share of smartphones, it’s still growing. It reached 5% share of all phones sold in the quarter and fourth most popular vendor in the world. Beating RIM, HTC, Motorola, Sony Ericsson and ZTE. 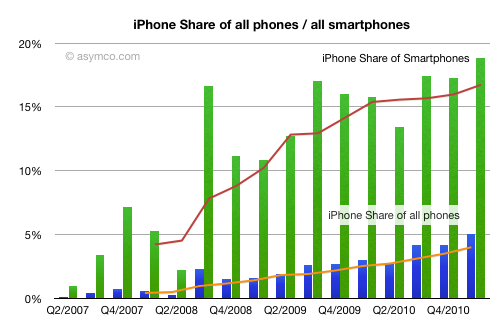 So what makes the iPhone dead in the water?

The claim was made relative to the (a) share of (b) mobile platforms (c) installed base (d) in the US. In other words, if one adds all Android phones in use vs. the iPhones in use in the US (while ignoring iOS devices other than iPhone) while the market is growing at nearly triple digit rates, then the iPhone is not gaining (much) share.

That’s the most obtuse way of suggesting a slowing product. If something is dead in the water, it isn’t going anywhere or making any progress.

On a unit basis and one the basis of vendor comparison, iPhone is doing very well. On the basis of value capture and profitability it’s doing even better. More about that later.