Much of what I write is based on the theories put forward by Clayton Christensen. I was fortunate to study under him fifteen years ago and since then his work has led to a fundamental review of what passes for business or management theory based on placement of innovation at the core of analysis.

Standing, as it were, on the shoulders of a giant, many scholars have taken the theories and adapted them to building new workman-like tools for taking the theories to practice. One such scholar, and friend, is Stephen Wunker, a classmate of mine and alumnus of both Harvard Business School and Innosight, Christensen’s consulting practice with experience as an executive at Psion, the original parent of Symbian.

Stephen has just written a new book that drills down on the questions related specifically to new market disruptions which are notoriously difficult to implement.

Consider how he frames Apple’s success:

The rise of Apple to become one of the world‘s most valuable firms is credited to the elegant simplicity of the products envisioned by its co-Founder and CEO, Steve Jobs. But the roots of Apple‘s accomplishments lie deeper –like the pathfinders of the Industrial Revolution, Apple visualizes how technology can lead to new markets. Rather than slog it out by battling low-cost computer makers cloning IBM‘s PC, it created a new market segment with the Macintosh that it has dominated for over 15 years. As growth in the computer industry began to slow, Apple re-defined the music industry with its iPod. More recently, it has generated explosive growth in smartphones and mobile applications with the iPhone, and initiated a totally new product category with its iPad. Apple has not beaten its competitors at the industry game–it has consistently changed the game to one where competitors seemed irrelevant.

I strongly recommend this book to anyone who wants to go beyond the theory of Christensen and delve deeper into practical tools that can enable a company to be disruptive. 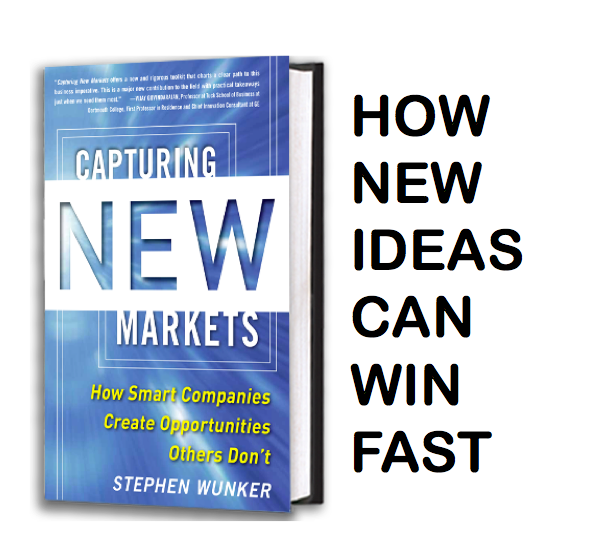 You can purchase the book “Capturing New Markets” (McGraw Hill) here (Amzaon.com) for less than $20.