By my estimate, Apple has paid out $16.6 billion to content owners. $2.5 billion to app developers and about $14 billion to music companies. The developer payments are published by Apple, the music payments are estimated based on total downloads and guesses about the split and pricing of that content (90% for the content and $1 to $1.2 average pricing over time.) There might be reason to move the music figure up or down but the difference will still be nearly a factor of 5.

The cumulative payments are shown in the following chart: 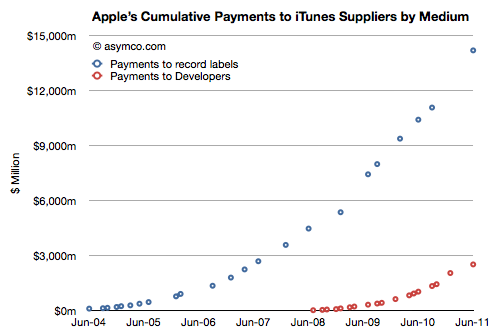 From this perspective, the music business is still a far bigger ecosystem than apps. However that’s cumulative data and digital music has been around far longer. The story can be told a different way: What’s the rate of sale in the present period? From what we know about the business, we can see what Apple takes in for apps and music (I’ve already estimated what Apple “keeps” after paying content owners) 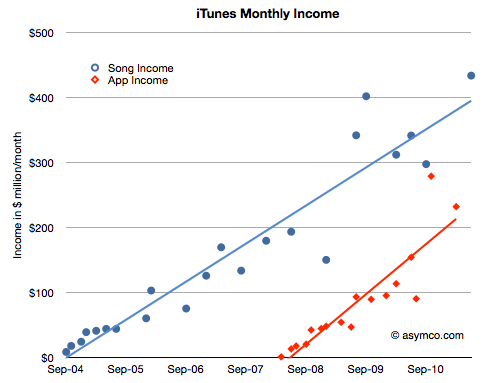 The combined “sales rate” is a remarkable $665 million per month, but the split now is that music generates only twice the income of apps (i.e. cumulative is a factor of 5 but on a monthly basis the factor is 2). But what should be more impressive is how quickly the app business is ramping. By the slope of the trend lines, it would appear that app income will exceed music income within three years. Therefore, it’s only a matter of time before apps generate as much income (exclusive of advertising) as music. 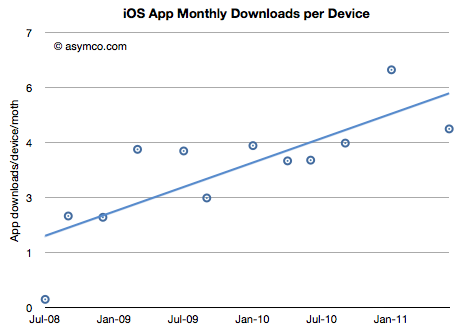 (You have to think of apps not as traditional computer applications or console games where each device has a certain number of expected apps attached, but rather that apps are more like a subscription where there is recurring monthly income).

I don’t have a comparable figure for music because the number of iPods and Macs as target devices is hard to estimate, but I doubt consumption for music on a per device basis is increasing. As a consolation, I can estimate the number of apps or songs per iTunes account. Here the story is consistent. 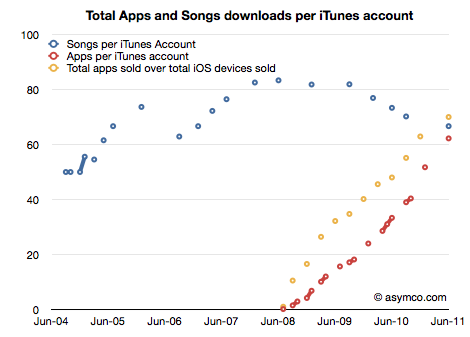 Each iTunes account has “consumed” about 67 songs but also 62 apps. Remarkable parity in such a short time. And the trend speaks for itself.

All this data points again to the ascendancy of apps as a new medium. In a mere three years these digital objects have redefined themselves. They went from being tools to enhance the use of your phone to a new medium of expression and art. They have the ability to create a powerful economy of their own and will likely lead a profound shift in where value resides in mobile computing.