Smartphones made up about 30% of global phone sales last quarter. That is a significant increase from 10% in Q4 of 2007.

The competition however still has 70.5%.

The chart to the right shows the challenge remaining and the progress being made.

The non-smart portion of each branded vendor’s business is pretty dismal:

The reason all these brands fell is because the unbranded vendors took their place. “Other” non-smartphones grew by 43%. They have been sustaining growth at the rate of 57% compounded over three years.

The following chart shows the increasing share taken by the “other” vendors in non-smartphone units: 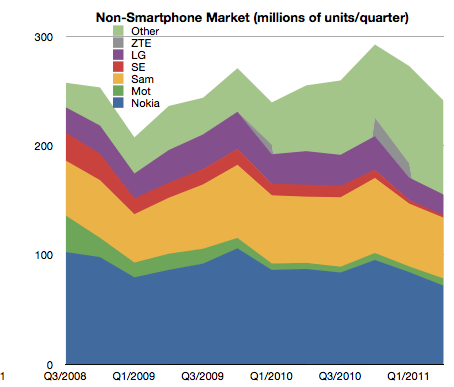 The non-smart business is so dismal for branded vendors that I’ve been assuming that they will cease to build such devices in the near future.

The trend is shown in the following chart which shows the percent of units for branded vendors which are smartphones. 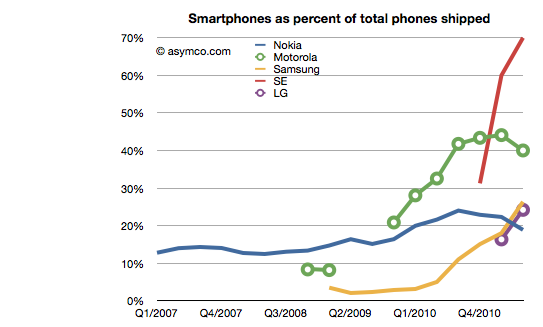 Motorola, Sony Ericsson and Samsung are fleeing to smartphones as rapidly as they can. LG is following as quickly  as possible as well.

The only question remains with Nokia. While their smartphone business evaporates they’ve also made a commitment to the non-smartphone market and are thinking about “the next billion” users who, presumably, will not buy smartphones and will buy some variant of Nokia’s Series 40.

Targeting the low end may be commendable, but the question they need to answer is why would those next billion buy anything other than a low cost smartphone? And if not, then what’s so different about the next billion?