Every few months rumors emerge of another technology company attempting to create a new product centered around the TV. Apple’s name comes up, of course, but so does Google. And Microsoft has been experimenting with no lesser degrees of vigor than the others. They all seem to be trying to make TV smarter, somehow.

But I would argue that these efforts are misguided. Television is more than the TV set or a set-top box, or any box. It’s more than channels or broadcasters or producers or aggregators or distributors. It’s all of these things; plus more. It’s a value network of great breadth and complexity. It’s a highly modularized industry with well-defined business model boundaries and inter-dependencies. I would argue that its very breadth is what has kept it rigid and immune from disruptive change.

If you look at each technological experiment to move to a new business model, they can all be reduced to the offer of an additional or substitutive module. There is no assumption made that the content being served will change. To put it in the context of mobile computing, it’s like trying to introduce a smartphone in a world without data networks–where the only service to be served is person-to-person calling. Unlike the Smartphone which could only have emerged to leverage the Internet, TV has no “smart content” to leverage. The “smartness” has to be not in the box but in the programming.

Of course, I don’t mean there’s a lack of good programming. What I mean is that there is no innovation in what a program is–the job it’s hired to do. The way it and its distribution fits into a person’s life. TV programs have not changed for half a century. They feature the same genres, the same duration, the same business model, the same series, format and scheduling and the same value chains as when “I Love Lucy” premiered in 1951. They assume people watch TV during the same time each day (while doing nothing else.) They also assume people are equally influenced by brand advertising and that audiences are largely homogeneous.

Contrast that with other media. The song, the book, the game, the newspaper even the movie have gone through consumption changes which have been supported by disruptive innovations. The portable music player, the ebook reader, the console and the mobile phone and the internet in general have all allowed consumption to conform to new usage patterns. The jobs that music is hired to do has changed dramatically. These re-definitions of what media is used for caused dramatic changes in both the production and distribution and hence the way value is captured in media.

So it’s not hard to understand why technology solutions have largely failed. Every attempt to make a change in a part of the value network has affected another part, which has led to resistance and reversal. Even Hulu, an innovative distribution method for content, owned by a group of incumbents, has had to scale back ambitions as the incumbents throttled it. Apple TV faces a stone wall of restrictions on distribution due to the inter-locking contracts content is bound by. Google TV has been largely shut out for the same reasons.

And I won’t delve deeply into the fact that TV is intensely parochial. There are few if any global brands, programs or regulations. Every country, region, city and town feels a need to localize its content and offer obstacles to external sourcing. Governments engaged with the industry so long ago that they’ve become co-dependent.

Only one experiment is entirely independent of the current network: YouTube. YouTube does not rely on current programming. It has allowed a new set of producers and new form factors to emerge. It’s still very rough and incomplete as a solution but it may get better. The growth is phenomenal and the business model is sustainable[2].

It’s hard to provide an illustration of how important this separate network effect becomes, and how long the time frame can be. The only proxy I can draw on is the story of how Voice over IP has grown in comparison to voice traffic over the switched network. The following chart shows how three types of traffic have grown in the US between 1997 and 2015 (est.): Interstate and Intrastate Voice (left column) vs. Internet traffic (right column) with IP voice inset inside Internet Traffic (areas represent relative traffic measured in Terabytes/month)[1]. 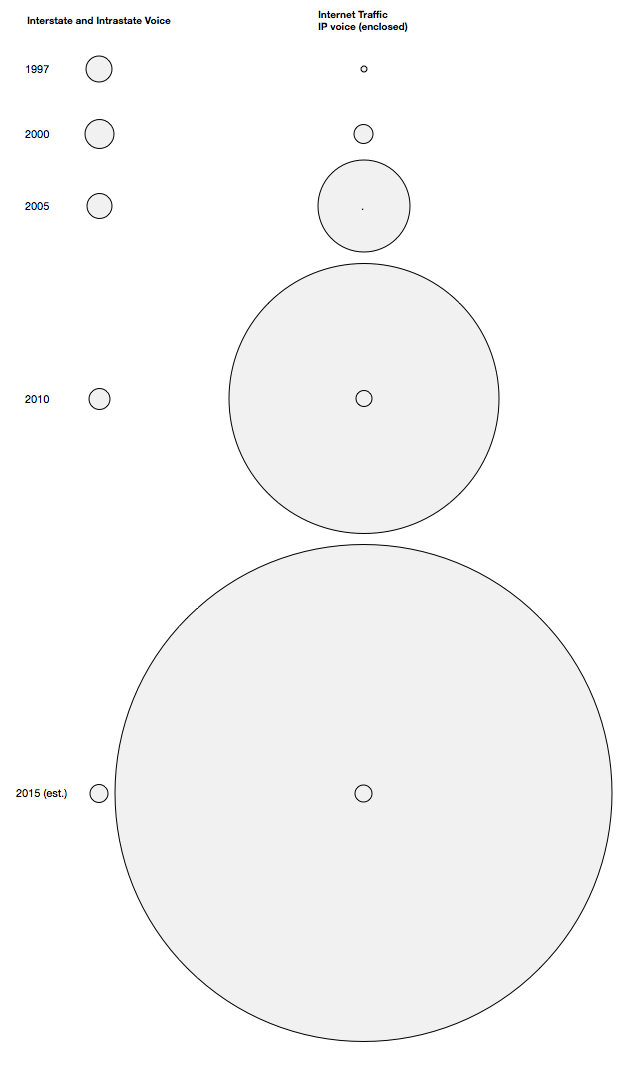 The estimate for 2015 shows that Voice over IP will reach 23,000 terabytes/mo. while PSTN voice will consume only 26,000 TB/mo. A negligible difference and one which will likely be in favor of IP over a global scale. The tail indeed does wag the dog.

The only numerate conclusion that can be drawn is that the growth of internet consumption is so vast that it swamps other forms of media, even if within the internet, media itself is a minor component.

So as far as having a vision of tele-vision, the answer is not to graft technology onto an archaic value network, but to build a new value network around new technology.