I began comparing Microsoft and Apple’s financial performance with a review of “top line” or revenues by product lines over a four year period.

This post is about the “bottom line” for the same companies and products.

Before I jump in I would like to make sure there is no confusion about the terms. I will be comparing “operating income”[1] as a measure of “bottom line”. This is a common way to compare the profitability of companies because it excludes taxes and interest income. These non-operating expenses/income can distort a comparison of performance because they can be the result of investment activity or changes in tax law or where the company is domiciled. One should not make judgements of comparative performance on those non-operational bases.[2]

The first chart shows Microsoft’s Operating Income by Division as reported by the company. 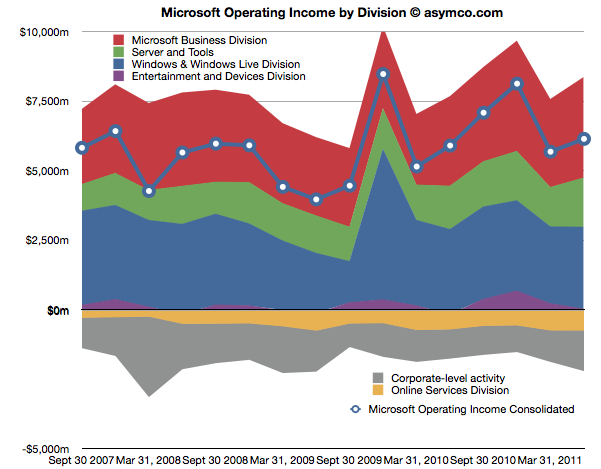 Each area represents a business division. Note some are showing negative income (losses).I’ve added a line representing consolidated operating income which is the sum of all areas (including the negatives).

The same line from the chart above is super-imposed on the chart below and is comparable to the orange line that represents the operating income that Apple was able to obtain over the same time frame. Note that both axes are using the same scale. 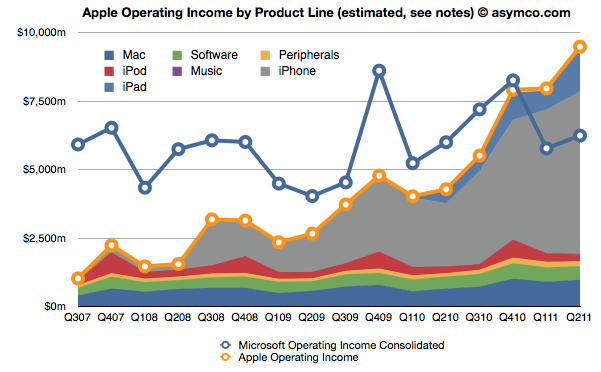 The Blue and Orange lines are indisputable but the allocation of the areas under the orange line may be open to debate.

As Apple does not report a break-down of each product line or division, getting the areas in the Apple chart is a matter of analysis and estimation. The method I used was to estimate gross margins per product (the overall gross margin is known) and assigning a portion of OPEX (also known) in a ratio equal to the sales level of that product. [3][4]

To make the contrast sharper (though more cluttered), I took all operating incomes from all product lines and divisions of both companies and laid them out as time series line charts in the following chart. I allocated Corporate Level Activity as an expense proportionate to each business unit in a ratio proportional to its sales. This allows comparison of product lines individually. 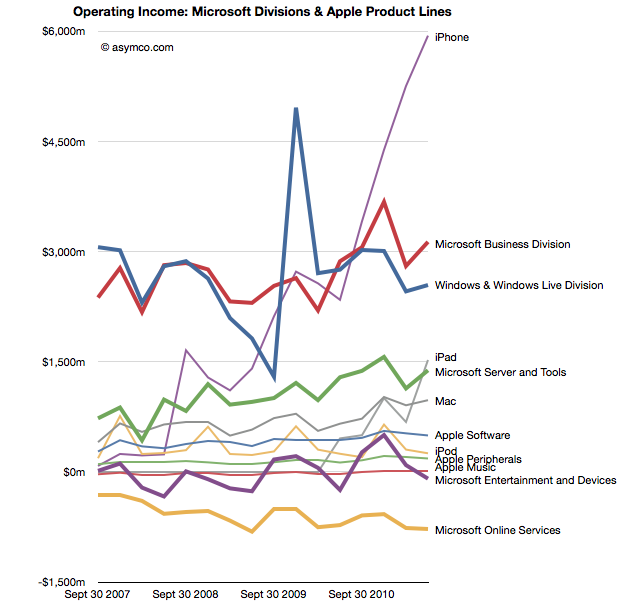 Finally, I combined all the iOS product lines (iPhone, iPad and iPod touch est.) as one line and laid it alongside overall Microsoft Operating Income (consolidated). 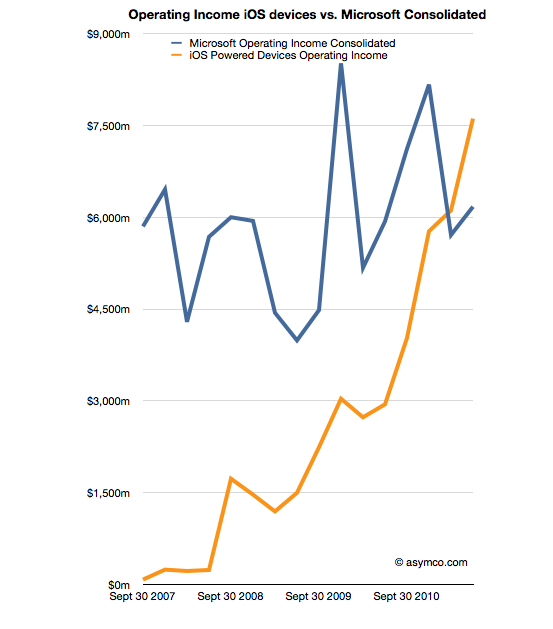 The second chart in this post showed that Apple has reached higher operational profitability than Microsoft by the end of last year. This fourth chart shows that iOS products combined are more profitable than Microsoft as a whole.

Microsoft invented the software business and built it to become the world’s most valuable business by the year 2000. It’s still been growing since and after 35 years it is reaching a profit of $27 billion per year. It did this while maintaining enormous margins and a highly disruptive monopoly business model the likes of which the world had never seen before.

It is scarcely believable then that a device business has been created to overtake it in four years.