Last week I proposed that there were two significant markets for the new iPhone: 1) the existing iPhone user base 2) smartphone “non-consumers”. Today I want to dig a bit deeper into the first market to get an idea of what it amounts to.

The following chart shows the total iPhone shipments over time with an estimate for the mix of models during the last two years. 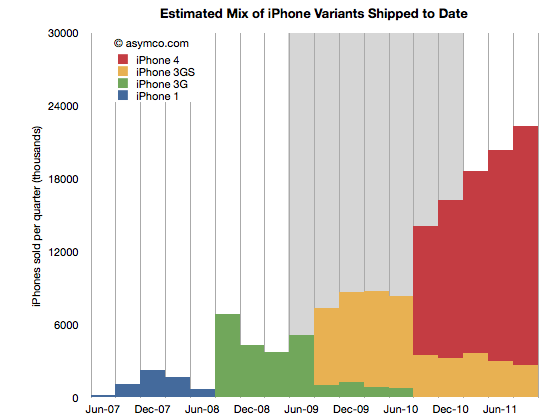 The way I calibrated the mix is by taking into account the statement that Tim Cook made that half of all iPhones shipped were iPhone 4. I first estimated that this past quarter (ending September) included about 22.3 million units. That makes the total iPhones to end of Sept 151.3 million. Half would be about 75 million. Therefore the red area needs to add up to that total. The remainder must therefore be the yellow, 3GS volume.

This mix implies that the following shipments by variant (through end of Sept 2011):

I also highlighted in grey the most likely target market for upgrades during the next 12 months. What I’m assuming is that recent buyers will not be likely to upgrade but those having purchased an iPhone two years hence will probably be looking to replace it. The naive approach is to assume all the iPhones beyond a certain age will be automatically upgraded. That would give almost 70 million units. However, not all those phones are in use and many of those phones may have already been upgraded to iPhone 4s. 70 million is a theoretical maximum. We have to be more specific.

In order to get a better figure for this I created a probability distribution (PD) which suggests the likelihood that the phones purchased in that quarter get upgraded in the next 12 months. I created two such PDs illustrated in the inset chart below: 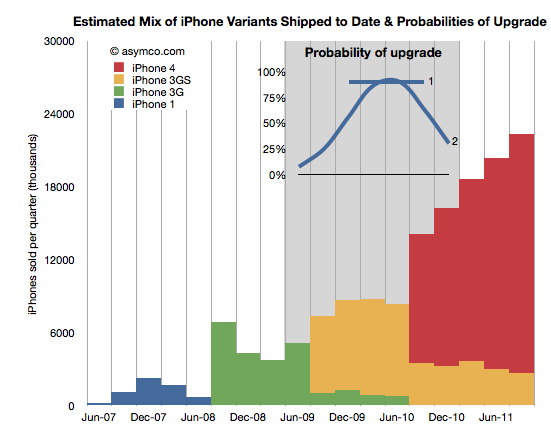 PD 1 is the simplest. It assumes that 90% of two year old iPhones will always be upgraded. PD 2 is a bit more nuanced where it assumes that there is a range of probabilities over a wider period, but with a peak in the 2 year old zone. These PDs are guesses but consider them starting points for debate.

By multiplying the probability in the line chart (PD1) with the area below it (the units it covers) we get get the shaded area indicating which phones (and variant) will be upgraded next year. 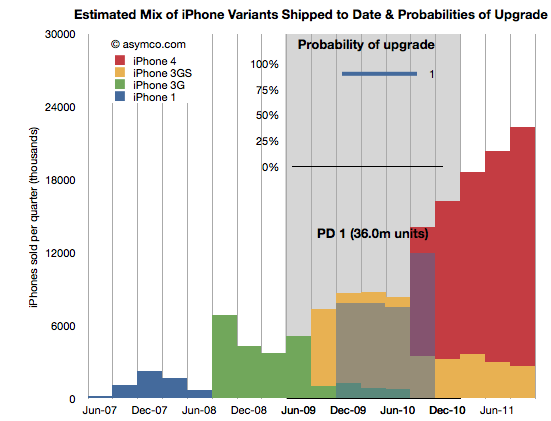 The areas not shaded are either left un-upgraded or represent phones which were already upgraded to iPhone 4’s last year. The PD1 assumption yields 36 million units.

Doing the same with PD2 yields a different upgrade set shown below: 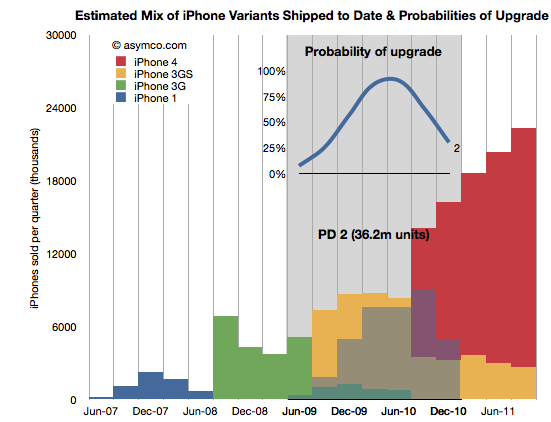 This assumption leads to about 36.2 million units upgraded in the next 12 months. Very similar to PD1 but approached from a different angle. Are these figures credible? I don’t know. The real PD may be quite different but I think these are pretty conservative figures. They are about half of the theoretical maximum.

Why is this Interesting?

This is interesting because of two reasons.

Firstly, it lets us calibrate our forecast for iPhone sales next few quarters. My own estimate stood at 140 million prior to this analysis. Is it reasonable? Remember that the target market includes non-consumption or non-iPhone, non-Smartphone users. Given the “guaranteed” market above at least 36 million, it makes the non-consumption target about 104 million. Does it sound reasonable?[1]

Yes. Primarily because most iPhones sold during the last 12 months were sold to non-consumers. And there were 76 million of them. Apple’s distribution has increased since and will continue to increase[2]. That means that Apple does not need to stretch much more than it already has to get the additional growth from un-penetrated markets. We know that this market is still measured in the billions of users. The demand is there.

Secondly, this is interesting from a competitive point of view. When competitors like Microsoft claim that Apple left open an opportunity by not launching a new iPhone “5” they are not looking at the world through the lenses shown above. From their point of view each new phone sold must come from their installed base or non-consumption.

But they don’t have any installed bases over 2 years old looking to upgrade. There are few Galaxy users who are yearning to upgrade since they just bought their first units. There are no Windows Phone users (and no Windows Mobile users) who are ready to upgrade to Mango. Since they don’t don’t see the world through upgrade “lenses” they see their marginal buyer as somebody who might have bought an iPhone 5 because it was the latest and the greatest in terms of specs or novelty.

However they cannot be hopeful that any existing iPhone buyer will switch because they know the satisfaction scores are above 90%. They also know the legendary Apple brand loyalty that keeps Mac and iPad and iPod users glued to their devices. They are also aware of the moats of iTunes, iCloud, hundreds of installed Apps and iMessage all designed to preserve Apple’s customer base.

Competitors have none of these things. They don’t have upgraders, or switchers to target. They can only target non-consumers. There their odds are better but Apple’s are at least as good.