Apple loves to talk about its stores. They do it in every conference call, keynote event and SEC filing. There is a monotony with the repetition of how many they have and how many they are building and how pretty they are. They start to seem like commodities.

But if they were commodities why aren’t there any other networks of successful “vendor stores”?

The answer is partly in the odd integrated business model Apple maintains asymmetric to every other modular technology provider. Apple seems to want to control the relationship with the buyer. It’s also partly in the uniqueness of design, an obsession with the brand. But still, that does not explain why can’t it be copied.

The answer is in the economics.

To understand the cost of developing an Apple store, we turn again to the balance sheet. Fortunately for us, Apple reports details of a particular asset called “Leasehold Improvements.” It’s a substantial asset worth over $2.3 billion in the last statement. It represents “alterations made to rental premises in order to customize it for the specific needs of a tenant.”

The following chart shows the change in that figure quarter-over-quarter. 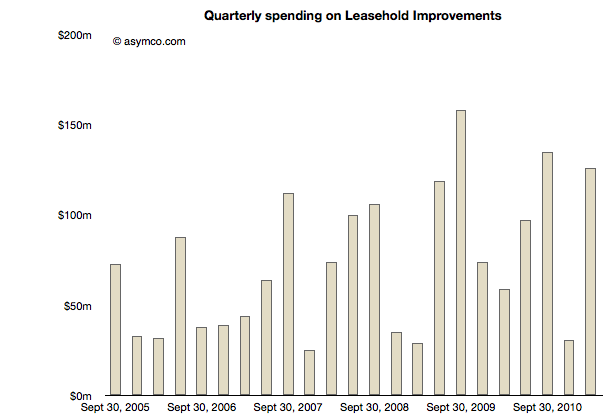 Can we tie these expenditures directly to stores? I overlaid the number of stores opened in the same quarters as the expenses in the following chart: 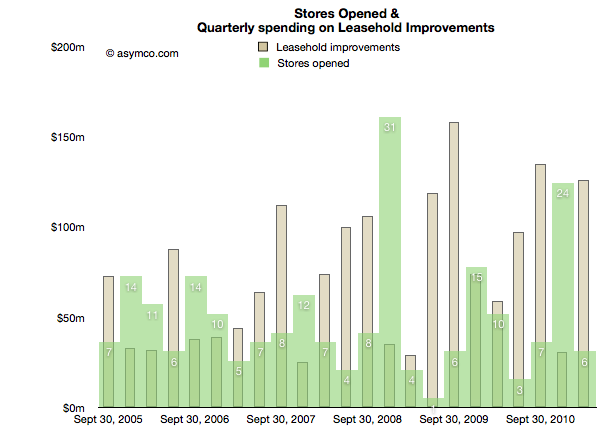 There does not seem to be much correlation. But if we consider that spending happens before a store opens and shift the openings forward relative to expense by one quarter we have the following: 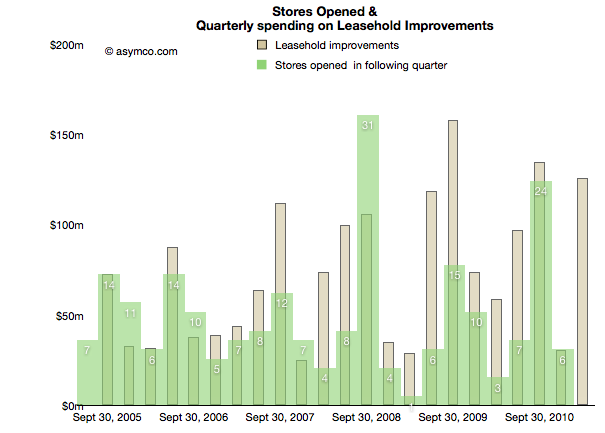 So if we are looking at store costs, just how much does one cost?

Over the time period illustrated, Apple opened 220 stores and spent $1.9 billion in fitting them out. That’s about $8.5 million per store. It’s been increasing so it’s probably closer to $10 million lately.

That’s an interesting figure by itself, evidence of how profitable they must be. But I turn the question again to competitiveness and the lack of response in kind.

The data shows that if a company wanted to duplicate this effort they would need to commit to spending at least $2 billion. And that’s just for “fixing up” the sites. This figure does not include the lease itself, the cost to operate (including the tens of thousands of employees) or the inventory within. It also does not include the value of choosing the right locations (though maybe a follower could simply choose to locate in the near proximity to an Apple store.)

So assuming a competitor (e.g. Microsoft) did commit to this spending, how would they recover it? I’ll keep this question rhetorical, but the hint must be in the unique way Apple is integrated as a business.