Apple’s Cash and Marketable Securities has been the focus of attention for many year now. It has now reached $81.6 billion equivalent to a value of $86.8 per diluted share. Currently each share is worth about $393 making the enterprise value $306/share or 11 times last twelve month’s earnings.

The division of liquid cash and cash equivalent asset types is shown in the following chart. 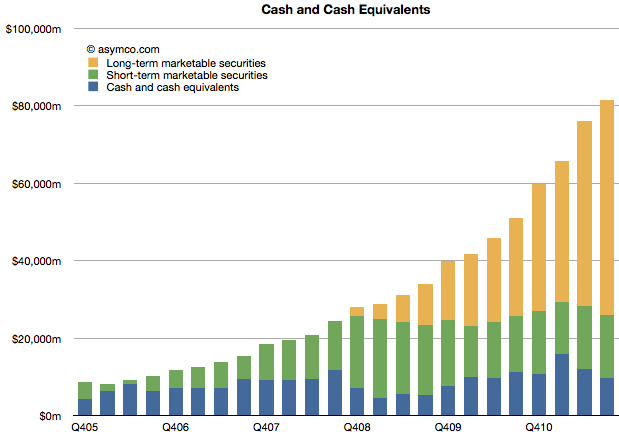 The company added $5.4 billion to its cash reserves during the quarter and now keeps two thirds of that outside the US. Long-term securities (bonds mainly) are now also about two thirds of total. Both of these ratios have increased this year. Some of this shift may be explained by changes in the strategy employed by the CFO/treasurer, but there is another set of assets that has changed dramatically and may explain the change in cash allocation. 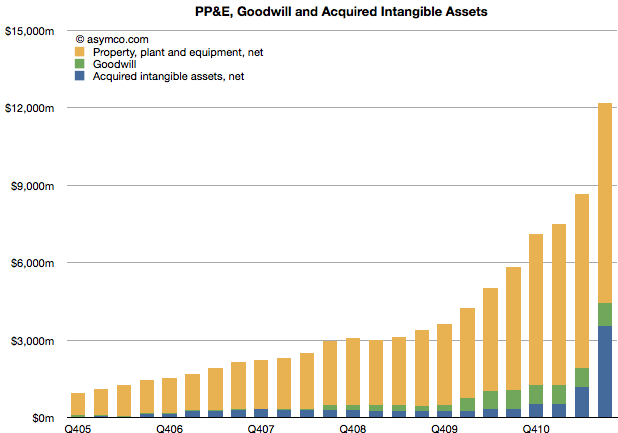 I’ve written about the PP&E assets and their dramatic increase, but the “Acquired intangible assets” have also had a huge increase in the last quarter ($2.3 billion). Much of that is attributed to the acquisition of Nortel’s patents.

Unlike cash, these assets can be considered an “investment” by the company. They are expected to (but may not) return value to shareholders in excess of the average cost of capital. Therefore, they demonstrate that some of Apple’s capital is being “put to work” rather than resting idle as many suggest. Apple is buying patents and companies and intellectual property. $12 billion worth so far.

Whether they will be a good investment, we cannot tell, but the allocation of capital to non-cash assets is already significant and has grown more quickly than cash. They have, in fact, more than doubled in a year and quadrupled in two.