I recently posted a comparison between the profit capture of phone vendors in 2007 and the most recent quarter: 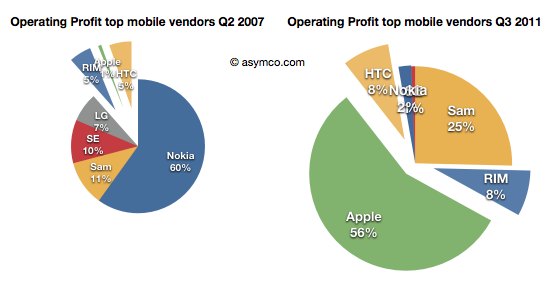 The idea was to show what a disruption looks like. A phenomenon where an entrant with none of the advantages of incumbency takes the profits away from companies privileged with ideal market access and knowledge.

The view of profit shift is the ideal view since it shows the “bottom line” impact and thus the denouement rather than more nuanced sub-plot. However, we don’t always have access to profitability data. Sometimes we only have access to revenue estimates.

Fortunately revenues have a similar story and are often a good proxy. Consider how the evolution of revenue shares occurred in the same market:

Revenues for Apple and HTC combined doubled from 17% to 33% for the third quarter over three years.

Note the similarity between this evolution and that in the mobile games market (data courtesy of Flurry):

The increase of revenues fro iOS and Android games nearly tripled over a two year period. Although we cannot say the same for profitability as the profits are not comparable since they allocated differently between platform and developer depending on platform, we can say that iOS is certainly driving vastly more value than Nintendo.

Sony and Nintendo may take some comfort from their console businesses which have not felt the same impact from mobility, but one wonders how long those franchises will last. Using an iPad with screen mirroring to a large screen TV already shows promise.