Every quarter Apple’s management issues a “guidance” or forecast of their own earnings in the following quarter. Over the years, this figure has been nearly useless because not only is it not accurate, the error itself has been wildly variable. I plotted what I call the Earnings Guidance Deficit for Apple based on the formula (Actual EPS diluted – Guidance)/Guidance. 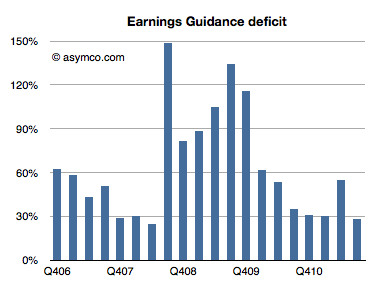 The higher the value in the bars above, the more the company underestimated (or under forecast) its performance. Note that during the recession the company routinely offered guidance at half the level they actually delivered. After the recession they returned to a more reasonable ~30% under-reporting.

The problem with this analysis is that there is such a high volatility in this factor that we can’t count on it to predict where earnings will fall. Even if we saw a range bounded at 30% to 60% the usefulness of this would be very low as that is far worse than the range that analysts can get through other means (Deagol’s accounting of analyst error). The best thing we can say is that the range seems to be bounded by 30% and 150%.

Rather than using this history for precision, perhaps it makes more sense to assume that the lower bound offers at least some limit to the possible value of next quarter’s earnings. Maybe it can give us a “sanity check” for our own estimates.

For the next quarter Apple guided $9.30 per share. If we assume a 27% “deficit” which is at the lower end of the range above then the earnings are likely to be about $11.8.

That’s equivalent to an 84% growth in earnings year/year. It would also imply $33 for the 2011 calendar year. At the current share price of $384 that implies a P/E of 11. That happens to also be the P/E for Apple at the trough of the recession in January 2009.

In other words, if the stock price does not rise (or falls) from the current level by the time earnings are reported in late January, then the P/E for Apple may drop to less than 11 on growth of 83%. That’s a sanity check all of its own.