HP’s CEO Meg Whitman admitted that, when iPads are included, Apple will overtake HP as the world’s leader in computer shipments.

“We need to improve our game and our products to take over the leadership position. Apple could go past HP in 2012. We will try to become the champion in 2013.

When the quarterly shipment data is seen as a chart the doubt of this happening disappears: 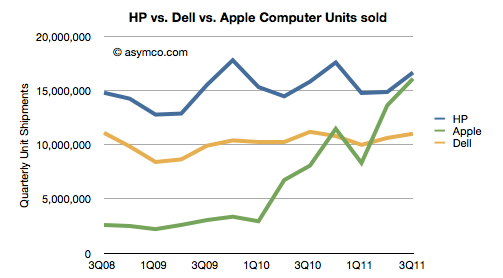 Note that the combined iPad+Mac has already overtaken Dell. In fact, the iPad alone overtook Dell in Q3 and might overtake HP in two quarters. 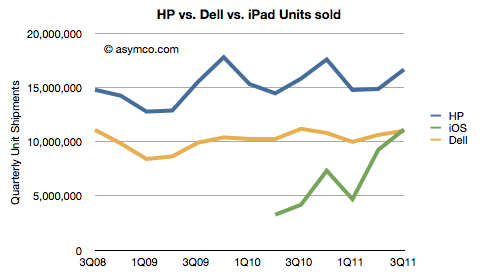 Placing the iPad in the “competitor” category is an important admission for a PC company. Categorization choices make all the difference when thinking about strategy. The new tablet product may not appear at first glance to be competitive with the current definition of a PC (though it might very well be a personal computer.) But definitions tend to evolve. Categories are abstractly defined. The original PC was certainly not competitive with Mainframe computers and perhaps it still isn’t. But that does not mean that usage (and hence value capture) did not migrate. Most people today would say a PC is a “real computer” and the Mainframe is simply an old computer.

Whitman notes that the iPad is not the only computer people use and most have a PC as well. That may be true as it was true when the PC was new. Most companies that supplied PCs to workers maintained large computers for “mission critical” applications like accounting and engineering. The two technologies lived side-by-side for many years. In fact, in the beginning there was a thriving market for software and hardware that would allow PCs to be used as terminals to access central computers. It wasn’t until PC servers and server software like that from Novell and networking from 3COM became commonplace that mainframes and minis began to fade.

So in practice, there was no big bang start to the post mainframe era. The evolution of the PC went through stages. It was an isolated local computer, a client-server solution and then finally a web-enabled communication product on its way to ubiquity. But the era did change.

So if history serves as a guide, the displacement of the PC won’t come from a direct substitution but a more sinister and hard-to-predict subversion through new applications and a re-definition of what a PC is. The driving forces are not just volumes but new input methods, new user interfaces, new jobs to be done, new software and many innovative companies working within an ecosystem. 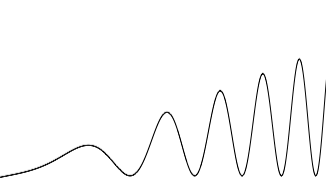 If there is one difference today it’s that things are happening a lot faster. A transition that took a decade is happening in three years today, even though the entire market is orders of magnitude bigger.

When I visualize the cycle time of technology change, I see it as the waveform to the left: as cycle time decreases (i.e. frequency increases), the opportunity (amplitude) also increases.