Before diving into the answer to the question in the title, there is some new data to digest.

The latest from comScore shows consistency with the previous months of smartphone growth in the US.

The following chart shows the weekly add rate with a three-period moving average:

This chart is important in that it should first show signs of inflection in growth. That does not seem to be happening yet.

The installed base by platforms is shown below: 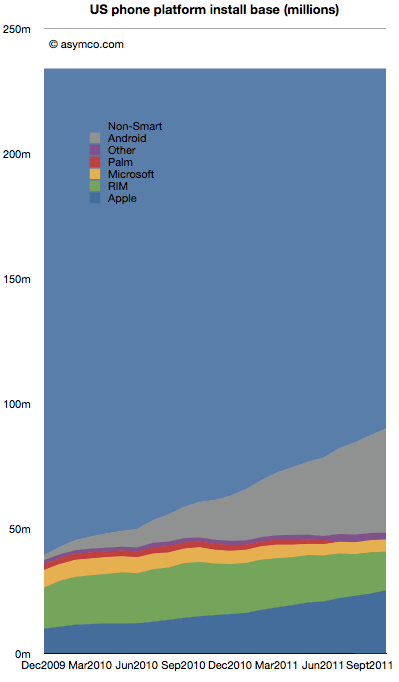 RIM BlackBerry lost one million users in October. RIM’s slide has accelerated again with over 3.7 million leaving the platform in the last six month. With 15.5 million subscribers, RIM has fewer users in the US today than it did in late 2009.

iPhone gained 1.34 million. Installed share increased slightly to 28% from 27.4% the previous month. There are now over 25 million iPhone users (above age 13) in the US.

Windows Mobile/Phone had no perceptible change (-34k) indicating perhaps that the losses in Windows Mobile are being erased by gains in Windows Phone. Microsoft’s platform stopped losing significant users six months ago. Whereas the bleeding has been stopped, overall number of users remains at a rather poor 5 million or 5.4% share.

“Other” which includes Symbian and WebOS lost another 184k users to reach only 2.7 million users.

There are still 144 million smartphone non-consumers.

Android and iPhone now make up nearly three quarters of all smartphone ownership in the US. That’s a total of 67 million users. With no sign of slowing, the chances are that there are at least 100 million users still remaining to convert. Sounds like an attractive target. But that target is shrinking fast. The rates of adoption signal saturation of most likely buyers will happen toward the end of next year.

At least 25 million new Android users will be gained and at least 10 million new iPhone users will be created in the next 12 months. That’s 35% of remaining non-consumption. Assuming some acceleration, it’s not hard to see 50% being claimed by the two entrenched incumbents.

This leads to an interesting positioning question. Is Windows Phone destined to compete with consumption or non-consumption? If traction is not forthcoming in the next 12 months, that leaves a very difficult last 50 million available as non-consumers. They are more difficult as they will be late adopters and perhaps more price sensitive and less motivated by features.

Windows Phone still has quite a bit of opportunity outside the US, but in the US (and in Europe which is not much different) the competition will increasingly be with rival incumbencies not with non-consumption. As the custodians of the Windows franchise, Microsoft should be well aware of the inherent difficulties with competing with installed platforms.