Thanks to all those who contributed to the big Mac index there is a substantial amount of pricing data available in one location.

The analysis that I hoped to perform on the data was to see if Apple was pricing specific products differently in international markets. It was prompted by some apparently anomalous pricing of the iPhone 4S in Brazil.

The analysis basically eliminates the effect of government on price and leaves currency and actual pricing signals from Apple as variables.

The analysis is not simple because there are many obscure tax rules. Some products are taxed differently in the same country. I have not completed the country-level analysis but have been able to see some averages over the countries reported (total of 45 reports.)

The following chart shows the average deviation from “Expected” as a percent: 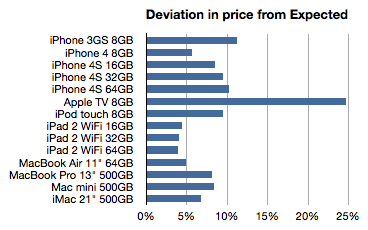 Here are some potential interpretations of this data:

If we take this train of thought it takes us to these conclusions:

Admittedly, these are quite aggressive conclusions given the limited data. What gives me some confidence in these conclusions is additional circumstantial data. The demand for some products is clearly higher outside the US than others. I believe and this data seems to support the notion that the overall strategy for the iPhone, iPad, Mac and iPod is being tuned for the international markets with some precision.