Gartner published its estimates for “PC” shipments during the fourth quarter. As I’ve done in the past, I combined their estimates with known shipments from Apple and separated Apple’s performance from the Windows-based market.

I also take into consideration the iPad as a potential competitor for computing purchases. Apple will report fourth quarter results including Mac and iPad shipments in less than two weeks but I am using my own estimates until then.

Here is how the platforms grew over the last few quarters (all figures are global): 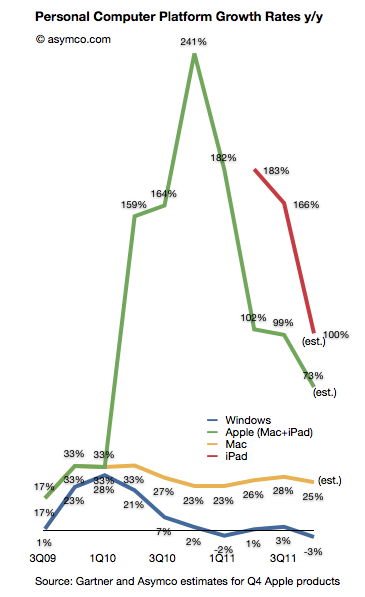 The Gartner data implies a 3% decline in the size of the Windows PC market during the last quarter. This is the fourth quarter of disappointing Windows performance. If you observe the pattern for the Mac vis-a-vis  Windows there is a similarity in the overall cycle but a divergence in terms of growth. The “spread” between Windows and Mac OS X is increasing and has reached an all-time high of 28 points.

But the more interesting story is that the decline in Windows seems to be coincident with the growth in the iPad. The green (Mac + iPad) shows the effect of the new category while the red line (iPad only) shows that growth in isolation (year-on-year).

Ever since the iPad launched the hypothesis that it has an impact on PC has been hanging in the air. Most analysts (including Gartner) argued that there was no effect from iPad and that the problems with Windows were all due to one-time circumstances. We hear the same about the last quarter with floods in Thailand being blamed.

However, in the latest quarter Gartner began suggesting that “consumers’ attention was diverted toward other product categories, especially smartphones and media tablets.”

One wonders if these “media tablets” are not PCs and yet they negatively affect the purchase of PCs whether they are indeed competing with PCs.