In a previous series of articles we discussed the capital Apple expends on equipment, real estate, leasehold improvements and data centers. Cost structure analysis reveals subtle shifts in strategy and the CapEx analysis demonstrates Apple’s increasing integration into its supplier network and integration into the distribution and service infrastructure that sustains its ecosystems.

Another form of investing (spending now, reaping benefits later) is the spending on research and development (R&D). Let’s have a look at Apple’s R&D expenses by quarter since Q1/2006. 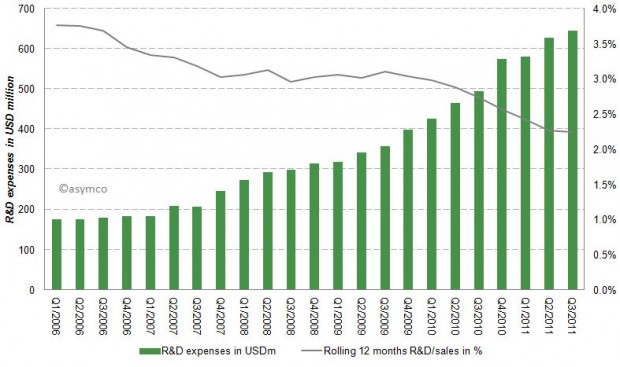 Apples R&D expenses as percentage of sales have been declining from almost 4% to close to 2% in the last six years as shown in the following chart: 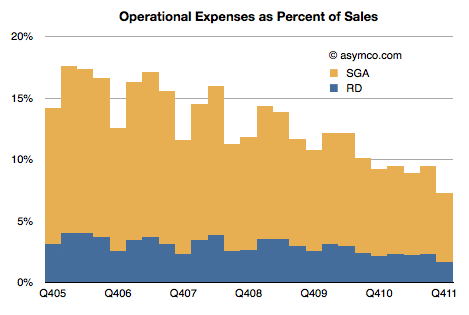 While Apple’s absolute R&D expenses have grown at an annual rate of 33% they have not kept up with the far higher sales growth rate. Apple’s current rate of R&D expenditure is compared to a peer group [1] below. 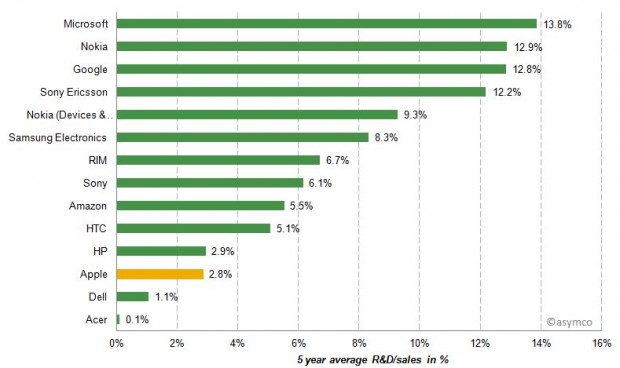 Apple’s R&D/sales ratio is between Dell and HP, companies which do not develop their own software or hardware.

Beside the absolute, relative to sales and relative to peers, another perspective is to measure relative growth. The following chart represents shows the 5 year average growth of R&D expenses and on the y-axis the size of last 12 months R&D expenses as a multiple of Apple’s R&D costs [2]. 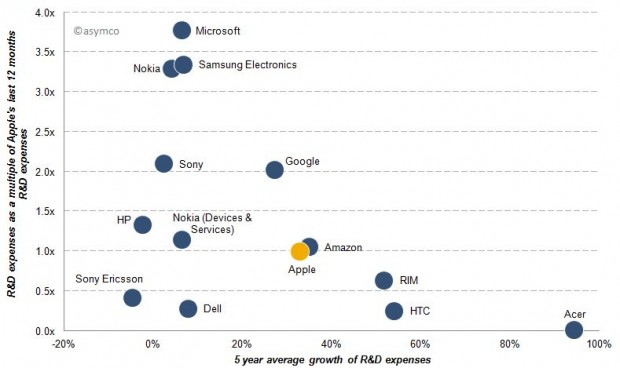 Acer’s R&D expenses for example are almost non-existent compared to Apple, but have grown almost 100% per year while Microsoft’s last 12 months R&D expenses are almost 4x that of Apple’s and have only grown slightly over the past five years. Google’s R&D costs have grown at a similar rate compared to Apple, but remained double those of Apple’s throughout the last five years.

Finally, we should look at the payoff from R&D spending over the last five years.  R&D growth should result in margin improvement, but does it? The following chart shows the relationship between spending (size of bubble), margin improvement (x-axis) and sales growth (y-axis). 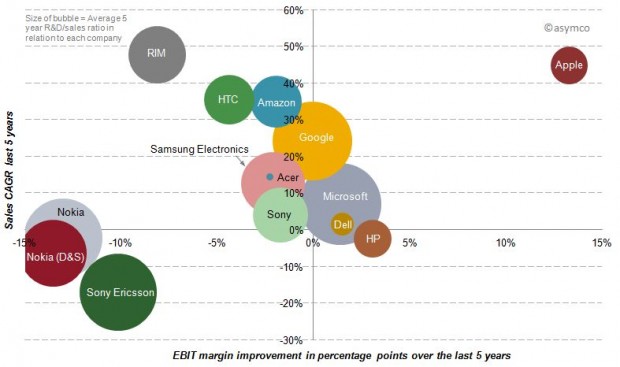 In spite of Microsoft’s, Google and Nokia’s massive R&D growth, their returns from that investment have been meagre to negative in terms of margin and only Google showed appreciable sales growth.

R&D expenditures on a stand-alone basis, in absolute or relative terms, do not correlate with disruptive growth. Essentially, you cannot buy innovation.

In fact, sometimes it’s nearly free. Most startups spend less on R&D than large companies do on stationery and yet the bulk of wealth creation has come from these tiny companies. The challenge is, in fact, that if you have resources you find ways of spending them (the quaint American cliche of ‘cash burning a hole in your pocket’). The temptation is always there to fund a new initiative which bright people can always envision.

“Focus is about saying ‘No’. And the result of that focus is going to be some really great products where the total is much greater than the sum of the parts.”, Steve Jobs (1997)

[1] Our set of peer companies as shown in previous posts but excluding LG, Lenovo and Motorola Mobility due to lack of data, but including Sony Ericsson and Nokia’s mobile phone division Devices & Services.