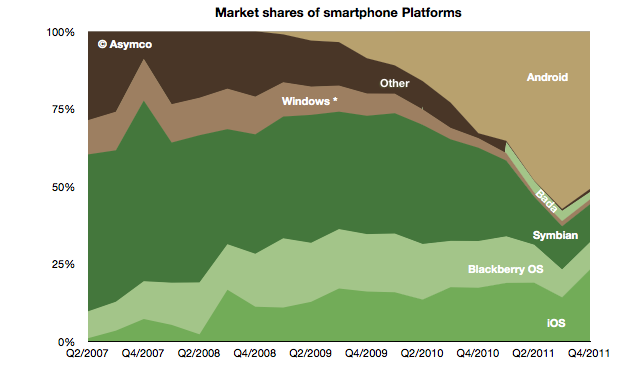 This symmetry can also be observed in another set of data. Published in The Guardian Kantar Worldpanel ComTech data shows the OS share changes for January on a year/year basis for a select set of countries. 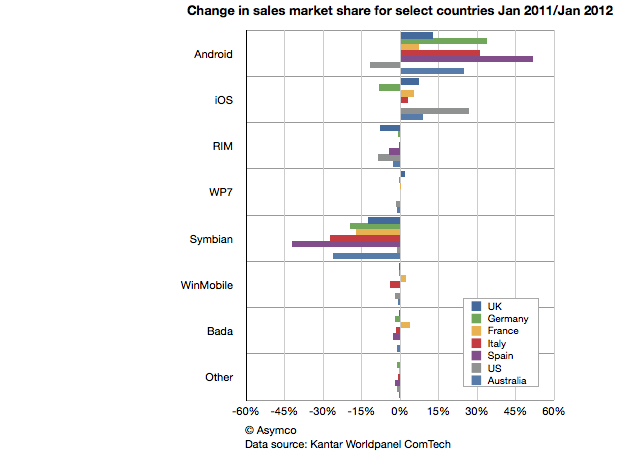 This should be most interesting to Nokia and Microsoft as both have a lot riding on Windows Phone replacing Symbian sales. If there should be a recovery in the fortunes of these companies, it would seem that their strategies should focus primarily on stemming and then reversing the losses to Android.

Microsoft’s strategy of increasing the cost structure for Android through IP licensing is certainly part of this picture but it’s a slow process to turn that disincentive for Android into a large incentive for Windows Phone.

Indeed, the speed with which Android handsets can be developed seems to be a key value of that operating system and one for which Microsoft does not have a good answer.  Nokia is now one year into its commitment to the Microsoft platform and it has a very limited portfolio to show for it (and limited sales as well.) As a result, Nokia’s Symbian business evaporated very rapidly. More rapidly than the company anticipated.

The dilemma for other vendors may well be how long will it take for them to develop a replacement for their Android portfolio in Windows Phone.

The opportunity cost of this switch is subtle and insidious but may be the root of why we don’t see a stampede toward Microsoft. Conversely, Android contract-free, implement-at-will availability may be its greatest selling point.