The phenomenon we call business disruption could benefit from a different name. Although it signifies a disturbance or an interruption in an industry, it’s much more than that.

The nominal definition I work with is that disruption is the “transfer of wealth in an industry from dominant incumbents to disadvantaged entrants.” It’s a convenient definition because it’s brief, it puts the emphasis on economic value and because it alludes to a reversal of fortune and the implied extraordinariness.

However, there are several nuances lost and contradictions ignored in this definition. I want to enumerate them here and now:

I’ve offered examples of these consequences or side-effects of disruption but I’ll emphasize once more the example I’m most familiar with. To illustrate the primary definition, the AMP index is a measure of the success of one company relative to a set of peers in the mobile phone industry. It’s the average of four market shares: mobile phone units, smartphone units, revenues and operating profits.

This chart shows the shift in AMP index values for the competitors whose data is public and which make up the vast majority of units sold: 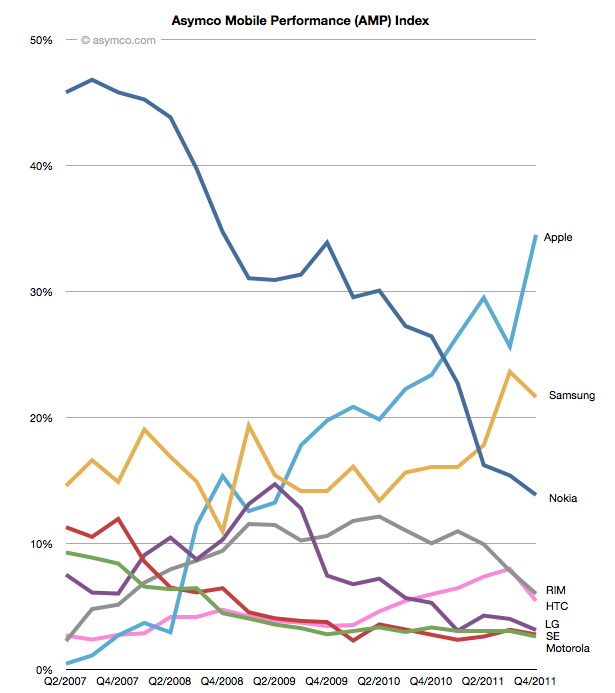 The reversal of fortunes, though not complete, is clearly evident. Motorola and Sony-Ericsson, two of the brands that were a significant part of the mobile phone landscape for more than a decade, have ceased to exist as independent companies. A third, LG, is likely to follow. Nokia, the most successful phone vendor for the decade of the 2000’s is in severe distress at this time, valued barely above book. RIM, a pioneer, is priced below book value and HTC, another pioneer is also looking for a way to remain relevant.

But we have to appreciate that as these valuations evaporated, the market grew both in value and in volume. The overall spending on phones has never been higher. The total profits captured is also growing. By any standard, smartphones are a booming business. Queues form for the latest versions, there are supply constraints and media coverage is almost universal.

We also have to appreciate that the Nokia that is faltering today was itself disruptive when it gained its prominence. In the 1990s the mobile phone market was dominated by Motorola, then by Ericsson. Nokia was a relative latecomer and succeeded by being better in some regards (e.g. the ease of use of text messaging on its phones) but also by being asymmetric. Using logistics and a portfolio approach to the market allowed it to build scale while maintaining margins. Process innovation led to component shortages for competitors and allowed Nokia to build massive distribution. It also allowed it to invest in software which gave it a unique selling point for several years.

Looking into the even more distant past, the mobile phone market has seen several waves of disruption. Going from analog to digital was such a turnover. The companies which were successful with analog (mainly Motorola which supplied not just handsets but infrastructure) were sidelined when global digital standards took root. Integrated European vendors dominated a period when 2G GSM was becoming predominant. Isolated pockets of integrated innovation like iMode in Japan also had mini-booms but were swamped by standardization and the Galapagos syndrome.

And let’s not forget that mobile itself has been disruptive to fixed line telephony. Looking at all telecom, the transitions from fixed to mobile, analog to digital and most recently feature-based to computing-based platforms have all been disruptive, bringing a new set of companies to lead while incumbents fretted.

It should also be noted that these changes are happening more rapidly. The chart above has a five year period. The change from analog to digital took longer. Over 10 years since its inception analog was still dominant. If we look how long it took for mobile to take consumption away from fixed, that process is still ongoing, several decades later. The speed is so slow that some countries have skipped over fixed networks altogether.

With software-defined devices and cloud-based distributed computing the changes will become even more rapid. Even though the user base is expanding to cover nearly the entire global population, the replacement rate of devices means that change in the tools and services people use are limited by supply rather than demand. Supply-based innovation or “the new manufacturing” will probably be the dominance-defining asymmetry of the next decade.

The disruption of mobile phones that Apple has foisted on the world through iOS has caused it to reach a point where it dwarves the values of other companies, not just in the sectors it competes, but in all sectors. Some suggest that Apple is an anomaly and does not reflect the economy. To truly understand the state of the economy, they say, means to subtract Apple from it. But I feel this is exactly wrong. Apple is, through the iPhone and iOS ecosystems, defining this era. Just like Microsoft defined an era of increased productivity through the creation of the “knowledge worker”, or like GM re-defined transportation and the notion of the brand in the 50’s, or like IBM re-defined business process efficiency with automation in the 60’s and 70’s, these companies were not anomalies of their era. They were the eras. They were the locomotives of growth that taught other companies how to operate and the contemporary managers how to manage.

Companies that study Apple today will benefit by understanding how it re-wrote the rules. The anomaly is the norm. The exception is the rule. The times they are indeed a-changin’.

Finally, to put disruption in a historical perspective. I wrote a retrospective on the history of the telegraph as a parable of how disruption could be interpreted to have happened even a century ago. What I hope to do now is to show how, given this set of spectacles, we can see how the fate of nations was determined, in part at least, by the ability of leadership to accommodate disruption.

The case of growth or limits to that growth, the question of integration vs. modularity and the evolution of value chains all have application for regulators, policy makers and political leaders.

The dialogue on this topic will begin in Amsterdam on April 13th 2012, at Asymconf. I look forward to seeing you there.