RIM’s CEO, Thorsten Heins was quoted as saying, “We plan to refocus on the enterprise business and capitalize on our leading position in this segment. We believe that BlackBerry cannot succeed if we tried to be everybody’s darling and all things to all people. Therefore, we plan to build on our strength.”

via RIM to give up most consumer markets | Ubergizmo.

RIM’s latest quarterly results show a continuation of the decline in sales that began in Q1 2011. 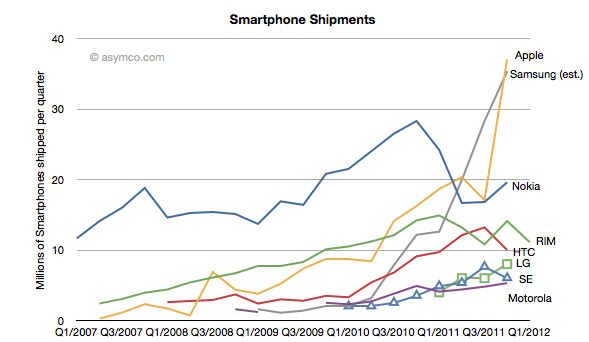 Here are the highlights:

Seen in isolation, the company is clearly struggling but does not seem to be on its last legs. But no company should be seen in isolation. As part of a competitive market, the company is in far worse shape. The following chart shows the AMP index which measures relative performance through a blend of market shares. 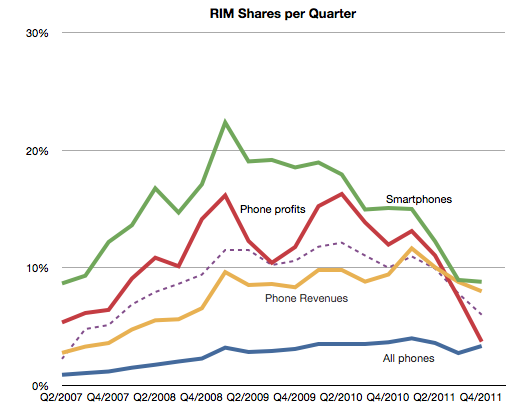 This chart does not include the latest quarterly data but if it did it would be sure to show a continuing decline. The AMP index actually shows RIM peaking in Q1 2009, well before the volumes peaked.

It’s within this context that we need to evaluate the new CEO’s strategic shift. In the quote above we have the first significant strategic departure and split from the past. Should it inspire hope or despair?

The idea of focus has huge benefits. Focus and the art of saying no are keys to greatness. However, you only succeed if you focus on the right thing. “Enterprise” is not the right thing. It’s not a valid target. Enterprise support is a feature, not a product. I don’t mean that as opinion, but as a point of fact. Focus on a set of customers whose only characteristic is a job description is missing the whole point of focus.

Focus needs to be positioned on a job a brand needs to be hired to do. The idea should be to solve an open problem which is either too complex or too uneconomical for anyone else to solve. Corporate buyers have problems to solve but the BlackBerry no longer offers unique or defensible solutions. Furthermore, corporate buyers are themselves being dis-intermediated from the computing purchase decision. Sometimes this process is called “consumerization” but it is more plainly explained as “commoditization”. The selection of tools for workers by a group that claims to understand their needs better than they do is an archaic concept.

This was true even in 2005 when RIM began targeting consumers. It was then that they saw the writing on the wall–that their enterprise business was being commoditized. All of RIM’s growth since has been in consumer segments. By abandoning that trajectory RIM is effectively giving up on growth. And giving up on growth is simply giving up.