One of the arguments made for the cause of the increase in Apple’s share price of late has been that dividends would attract more institutional investors and provide more liquidity to Apple’s shares. Can we test this argument?

We’re not dealing with speculation. The decision to start paying dividends was made three weeks ago. It makes sense to assume that this new information has been absorbed by the  markets and market participants have adjusted their positions. Funds that were previously restricted in their investment in Apple due to its lack of dividend policy, could now go ahead.

However, as the following chart shows, the share price climbed continuously before and after the dividend declaration of March 19th (shown in red). Trading patterns did not show unusual highs or lows. In fact, after March 19th the trading volume decreased on a weekly basis. 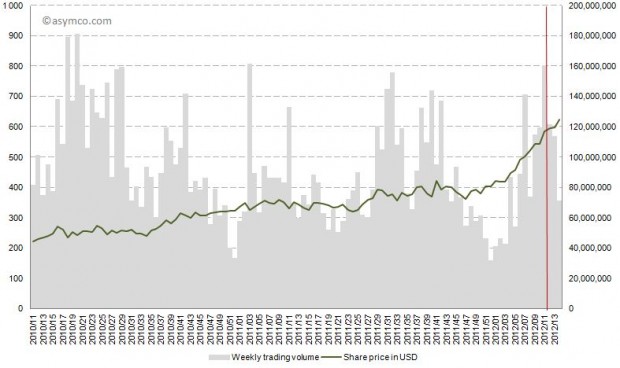 The other indicator is institutional holdings. The share of institutional investors as percentage of all outstanding shares did not increase significantly, and has been in an overall decline since late 2010. 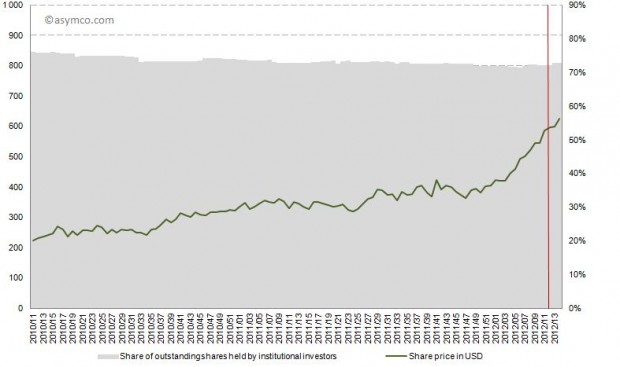 But this lack of visible response to the decision should not be surprising.

Dividends are a tool to adjust capital structure based on optimal investment decisions. Dividends do not add value. The value of a company reflects the perceived net present value of all free, future cash flows. Whether the cash is in or out of the company is immaterial to its value. In either case the cash belongs to shareholders.

What the market is reflecting is fundamentals, not any change in liquidity due to “more buyers” available. For a long time the fundamentals were not accepted as sustainable. The best explanation for the rise in the share price is therefore that the company’s future is now becoming clearer and a cloud of doubt is being lifted.