There were few surprises. There is much more detail in terms of regional performance which might be a better indicator of how the smartphone strategy is playing out. I plotted the data in three charts. 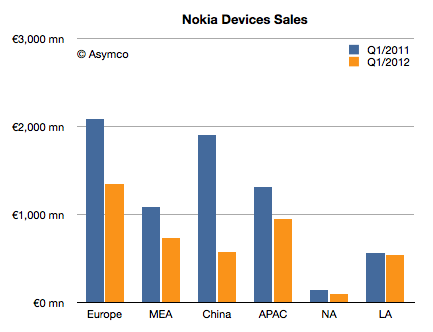 A year ago Europe and China were nearly equally valuable as regions to Nokia (€2.1 billion and €1.9 billion, respectively). Even though sales fell across all regions, China fell so much that it has become the fourth in value and nearly the same value as Latin America (€577 million for China vs. €542 million for Latin America). This is a significant reversal for a very important market. The drop in value is a staggering 70%. Is there some clue as to what caused this? 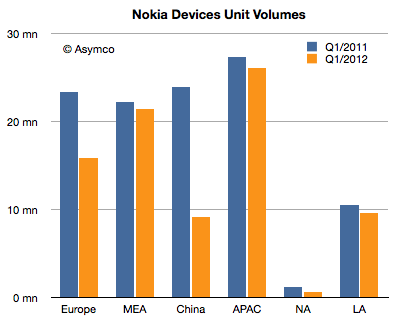 The data on volumes shows that Europe’s drop is consistent (35% drop in value coupled with 32% drop in units). This implies an erosion in pricing but not a very large drop. However, in China the volumes fell less rapidly than sales (70% drop in value and 62% drop in volume). The pricing story was significantly worse. This story repeats in Middle East, Africa and Asia Pacific where volumes held but value dropped. This implies significant change in pricing in those regions. That’s borne out by the chart below: 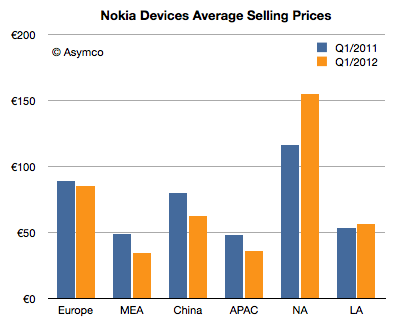 Prices in Europe dropped by about 4% but in China they dropped by 21% (from €80 to €63). In APAC the drop in price was 25% and in Middle East and Africa it was 30%. In the Americas prices increased with North America up by one third and Latin America by about 6%.

This uplift in NA is primarily due to the Lumia launch as channel was being filled. However, note that North American volumes were extremely small: only 600,000 units sold (inclusive all models).

As the Lumia line was not available in many markets, and as only 2 million were sold, it’s hard to see its impact. The only clear effect was on North America prices and that overall smart devices ASP held the line (down only 2% y/y and up 2% sequentially). The €220 average price for Lumia was well above the €143 for all smart devices sold. Nevertheless, smart device volumes were down 50% to about 12 million units–nearly the same as RIM’s pitiful results.

What these data points add up to is that Nokia cut pricing aggressively while losing volumes. The price cuts were “forced” by conditions and probably were designed to slow the drop in demand. Emerging markets, once Nokia’s core growth area, showed dramatic value contraction due to price pressure. Nokia’s brand value, which normally allows for price premiums regardless of functional value, is clearly evaporating in its last bastions.