During my talk at the first Apple Investor Conference in January I said that I would pay very close attention to the Machinery, equipment and internal use software line item from its PP&E during the next quarterly report (it appears on Page 13 in the latest report).

The reason I consider this important is because capital spending has provided reliable foreshadowing of iOS device production. This is itself because Apple invests in the equipment used in the manufacturing processes for its devices. The more spending on equipment, the more production capacity is brought to bear and the more units are produced. Since iOS devices tend to be supply constrained, the more units are produced then the more are sold.

The first quarter of the fiscal year saw a very small increase in CapEx which caused me to “backload” spending later in the year. By watching this spending, we can assess approximately when and for which products is investment allocated. If the spending happens early then we can anticipate an early update to the iPhone. If it happens late then we can anticipate a late release. So has the ramp-up begun as of the second quarter (first calendar quarter)?

The following chart begins to give us the answer. It tells the story of spending by tracking the change in asset values: 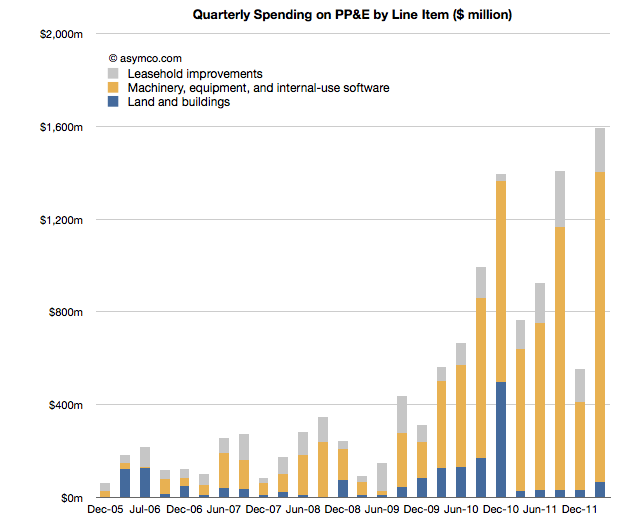 Stripping out the Machinery and Equipment portion (in yellow above) and overlaying the following quarter’s iOS shipments yield the following composite graph: 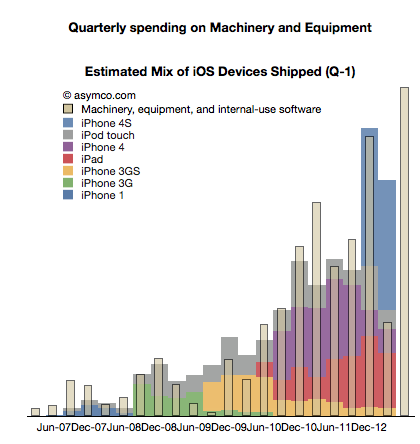 It would appear that there is significant acceleration into the second quarter. Is it something significant?

The increase in M&E is the highest for any quarter to date. Some of that is undoubtedly in service of the new iPad but some must also be the initial ramp-up for the new iPhone.

At $1.3 billion, the spending is substantial and a new record, but it does not make a big dent in the overall budget for the fiscal year. Half-way through the year, the total spending on M&E and Real Estate is still only 26% of the budgeted $7.1 billion. You can see the gap in the following chart. The yellow line needs to match or exceed the blue line after the next two quarters. 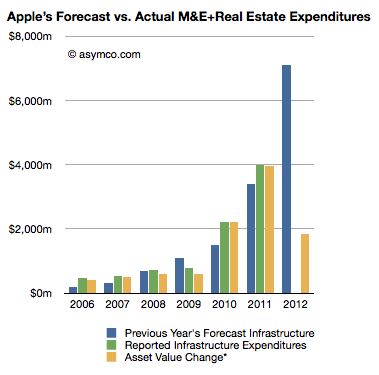 In order to reach its own expectations, the spending therefore needs to double from the current rate to at least $2.5 billion/quarter over the next two quarters.

Such numbers are hard to grasp. They are unprecedented not only for Apple but for almost any comparable company. Just as a reference point, they will have to exceed the historic average CapEx rate for Google by more than 100%.

Regular readers will note that there is nothing new in this analysis. This is only an update in a continuing story. The pieces are in place for continuing the existing rate of growth.

Footnote: for those who are unfamiliar with the idiom in the title: Up to eleven – Wikipedia, the free encyclopedia