Markets are difficult to measure. Mainly because the information is not easy to obtain and that which is obtained is not made public. Collecting, analyzing and filling in the gaps is big business with many firms involved in selling it.

However, with all the analysts and companies selling and promoting their “numbers” it’s important to understand the difference between the methods used. There are for instance at least the following measurements:

Each measurement tells a different story about the market but the best story is told when all data is analyzed in a combined integrated market review.

What does “Sold” mean?

Let’s say that you sell a phone to another party. What constitutes a sale? The sales agreement? That you shipped it? That he wanted it? That you were paid for it?

As it turns out, yes there are; many ways. Unethical and fraudulent practices happen surprisingly often. A classic instance would be: A customer is shipped ten phones, though he only wants one, and he gets paid to ship the other nine back, after the close of the year.

The sales manager records ten times the sales he actually made, making ten times the commission and the company’s stock price rises. To compound the offense, the manager could also tip his friends to short the stock at the end of the year, leaving investors “holding the bag” when the inevitable correction follows.

There have been so many cases of this kind of accounting fraud that the FASB (GAAP), SEC, and IFRS have placed a very stringent definition on “revenue recognition”. This means that although you can sell all you want, the company can only recognize the proceeds and profit in the financial statements according to strict rules.

In the case of hardware (Sales of Goods), the customer must receive it (“delivery has occurred”), and like it enough to not return it (“amount to be refunded”), and be able to pay for it (“collection is probable”). If some are projected to be returned or unpaid, that percent is subtracted from total revenue. In the case of software (Sales of Services), it is generally accounted for over a time period. And because it is customary to send the customer upgrades, the revenue must be spread out over the time the service is provided. (“upgrade rights … 24 to 48 months.”)

It gets complicated when a piece of hardware has upgradeable software. The rules used to stipulate that the hardware, in its entirety, must be accounted for as a service and have subscription accounting. This is how Apple had to report sales during the first few years of the iPhone. It still defers some revenues for its hardware, mainly on account of iCloud, but the vast bulk of hardware revenue (96%) is now accounted upfront, recognized upon the product’s acceptance by customers. 4% is for software upgrades and is accounted for over a specific lifetime of the product (24 months in the case of the iPhone).

What does “Shipped” mean?

The discussion so far implies that if a product that is accounted for as “Sold” on an income statement does not mean that it’s in the hands of an end user. These “revenue recognized” products are sold to a distributor, typically for a phone that’s an operator.

These sales satisfy the requirements for financial reporting as revenues booked. But they are not in the hands of users. Nor are they “activated” and they don’t generate page views that are measured by web analytics companies. Most analysts and companies now use the phrase “Shipped” to describe these revenue-recognized units though it’s also common to hear “sold”.

When a product sells to end users it’s sometimes called “sell-through”. It’s counterpart is “sell-in” which is sales to the channel distributors.

A big gap between sell-in and sell-through might imply large amounts of in-channel inventory. This is product that is sitting either in stores or in warehouses or on trucks in transit. If sales are steady, the inventory is measured in time as in “weeks of inventory”. This means that the excess is expected to be sold within a fixed time frame if shipments were to end. The smaller this amount, the better or “tighter” the operations are. Inventory, as Tim Cooks says, is fundamentally evil. It eats capital and erodes profitability.

Sometimes miscalculation of sell-through could result in vast amounts of inventory that has to be returned by distributors. That inventory is either written off or sold at fire sale prices resulting in a “write-down”. This happened recently with both the HP TouchPad and with the RIM PlayBook. This special charge against income is a one-time (usually) incident but it can also affect a firm’s reputation with channel partners for a long time. This type of failure is very costly.

Therefore what matters most is to keep the difference between Sell-in and Sell-through as small as possible. However, it can’t be too small. Sometimes if Sell-through is too fast, you get stock-outs which means that there is more demand than supply and sales opportunities are missed. This has happened many times with iPhones and iPads. This is also an unwanted situation (unless there was too much inventory in the channel during the previous period and thus it was being drained in the current period.)

The chart to the left shows how the phone market looked for various vendors last quarter. I compiled the data based on Gartner’s “sales to end users” and IDC’s “shipments” data. Two vendors had higher sell-through than sell-in (Nokia and LG) probably because they were draining excess inventory. The others had channel inventory of between 5% and 10% of units shipped.

This ratio is shown below in a chart comparing the largest phone vendors. 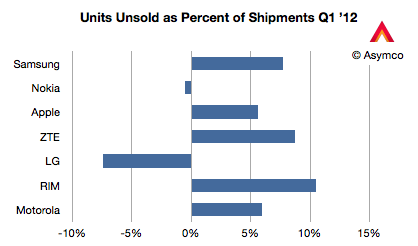 Management is often rated for performance on this metric, as they should be, since it’s a measure of operational skill. However, there are many factors that affect overall performance.

Understanding the overall market requires an appreciation of this distinction but also an understanding of all the other metrics listed above and what stories they tell.

Notes: My thanks to Michael Dediu for input on this discussion.